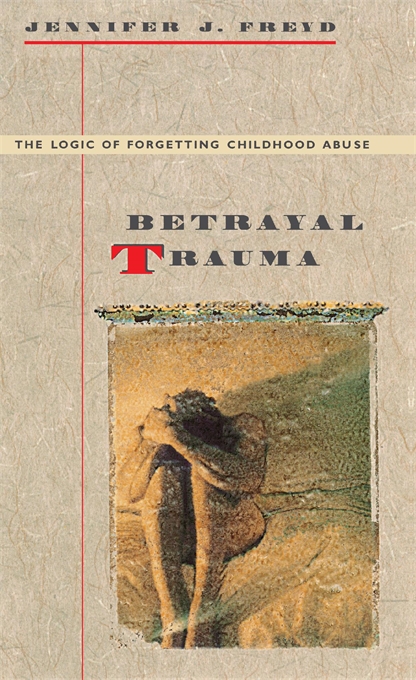 The Logic of Forgetting Childhood Abuse

“A century of observation leaves no doubt that some traumatized people develop amnesia for the event and may not recall their experiences. How can we understand this?… Freyd calls attention…to the social context in which the trauma occurs. The relationship between the victim and the perpetrator is central to her theory. ‘In order to survive in cases of core betrayals (abuse by a trusted caregiver on a dependent victim) some amount of information blockage is required.’… In one of the most ingenious and original sections of the book, Freyd puts her hypothesis to the test by reanalyzing data from four recently published studies of adults with histories of childhood sexual abuse. In each case, she finds that those who were abused by close relatives were more likely to have forgotten the abuse… [This book is] a thoughtful and impassioned treatise by a survivor who has transformed her own betrayal trauma into an investigation of the psychology of memory.”—Judith Lewis Herman, The American Journal of Psychiatry

“Betrayal Trauma is not a polemic tract but a knowledgeable treatise on the subject of memory formation, and forgetting. In covers in scholarly, yet clear detail the formation and logic of memory and its retrieval… The book is highly recommended for all those interested in the field, for it encapsulates the research whilst clearly showing the plausibility of what Freyd calls the ‘logic of forgetting childhood abuse.’”—Dawn Baker, ANZJFT

“This book clearly goes beyond the previous texts [on recovered memory]… Freyd has provided a book that is interesting and informative for the layperson, practitioner, and researcher. By the end of Betrayal Trauma, the reader will have a solid understanding of the issue and controversies related to forgotten child abuse. More important, the reader will understand that there is a logic to this forgetting that could be conceptualized within a particular model.”—Jonathan M. Golding, Child Maltreatment

“Freyd’s book is elegantly and economically written, argued with clarity and precision and presenting testable predictions… [It is] the best book on motivated amnesia for childhood abuse.”—Phil Mollon, Clinical Psychology Forum

“Jennifer Freyd describes a logical, often elegant theory of forgetting childhood abuse experiences and other upsetting events… [She] addresses the politics of the recovered memory/false memory debate in a sober and rational way that encourages thinking over affect. She does this despite her own painful experience with both the topics of abuse, itself, and the impact of the False Memory movement on those who report recovered memories… I found this book to be refreshing, intelligent, and challenging. I recommend it to the mental health community, cognitive scientists, and the interested layperson.”—John Briere, Contemporary Psychology

“One may easily predict that this book, and the theory it proposes, will be considered as a central milestone in the research of human psychology in the next decade… There are certain books, and they are not many, which reading is equal to a successful psychotherapy, and which inner truth penetrates the heart. This book most certainly belongs among them. Freyd’s writing combines experience, sincerity, and courage with professional capability.”—Irit Y. Yaar, Attorney, Mar’ariv Daily Newspaper

“A powerful work dealing with the often forgotten element of betrayal in the paradigm of traumatic (non)experience… Freyd’s work places itself squarely against a segment of American medical community that stresses the shortcomings of ‘false memory syndrome’… A survivor of betrayal trauma herself…Freyd should be commended for standing up to a (distinct) typos of traditional psychiatry…[that discounts] an individual’s experience by naming it as indicative of false memory syndrome.”—William Aljandro Martin, Metapsychology

“Rational views of the available evidence [surrounding recovered memory] are rather uncommon… That, in addition to the intrinsic merit of the book, is what makes Jennifer Freyd’s Betrayal Trauma such an exceptional document and raises it to the level of a landmark contribution. Betrayal Trauma is a feat of superb scholarship and remarkable objectivity and integrity… Adroitly employing everyday experiences to make potentially complex processes and concepts immediately accessible, Freyd reviews the literature on both the distortion of memory and the preservation of memory with admirable evenhandedness… Freyd’s own theory is simple and elegant… For the scholar, the mental health professional, and the intelligent lay reader, Freyd’s rich and rewarding work offers powerful testimony that a scholar with integrity and compassionate rationality can withstand the onslaught of impassioned hysteria and redirect a field’s attention to its basic concerns. She has set a new standard for responsible scholarship in this frequently troubled and troublesome area of study. Let us hope her example proves influential.”—Dr. Richard P. Kluft, The Pennsylvania Gazette

“Jennifer Freyd has written an incredibly powerful and moving book, the kind where her thinking gets yours going and you start to jot notes in the margins as you tear through it… Dr. Freyd has risen above the fray about repressed memories.”—Patience Mason, The Post-Traumatic Gazette

“[Freyd has set] out on an ambitious mission: to review the scientific evidence relevant to the hypothesis that child abuse is most likely to be forgotten when the perpetrator is a trusted caregiver. The result is a book of stunning clarity and objectivity that contributes a great deal to the literature on psychological trauma… Dr. Freyd marshals an impressive array of scientific evidence…and she does so in a way that is accessible to a broad audience. This book sheds light on some of the thorniest questions about the delayed recall of childhood abuse without resorting to emotional pleas or sanctimonious grandstanding. Dr. Freyd lets the data speak for themselves, which results in one of the finest integrative reviews of traumatic-memory research to come along in the past decade… Ultimately, Betrayal Trauma is a triumph of objective evidence over impassioned pleas, politics, and media sound-bites. This book is a must-read for anyone who has a personal or professional stage in how our society deals with the issue of childhood abuse and its treatment.”—Aaron E. Black, Ph.D., Psychiatric Services

“Betrayal Trauma stands apart and claims our serious attention on several counts. It systematically presents a plausible theory to account for amnesia for childhood abuse and evidence to back up that theory; it makes sophisticated use of contemporary cognitive science; it is well written and avoids…descent into hyperbole and belittlement; and, finally, it notes alternative interpretations of the assembled data… Because it is a cogent, well written, and informative presentation of a way of understanding and accepting the validity of lost and refound memories of trauma, Betrayal Trauma is highly recommended reading.”—C. Brooks Brenneis, Ph.D., Psychoanalytic Books

“In this well-researched book, Freyd has articulated a theory of memory loss and recall surrounding childhood abuse that is both grounded in cognitive science and immensely validating of and accessible to feminist therapists… She covers a tremendous amount of ground, all the while articulating complex processes in clear, relevant terms. She made memory research exciting and relevant to me as a therapist while satisfying my researcher’s need for evidence… Freyd has taken a courageous huge step in bringing both sanity and clarity to the field of child sexual abuse therapy.”—Susan L. Morrow, Ph.D., Women and Therapy