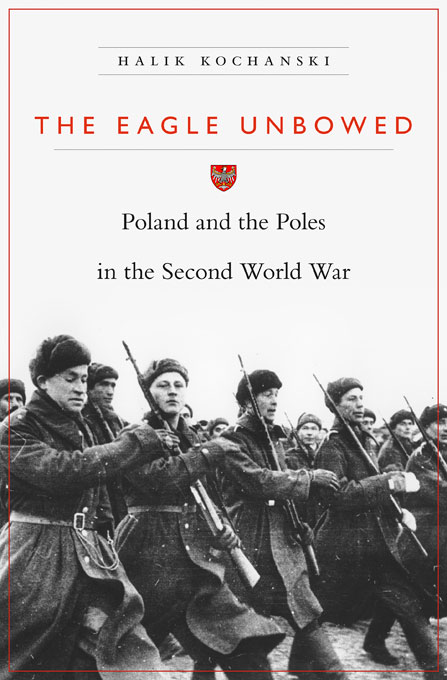 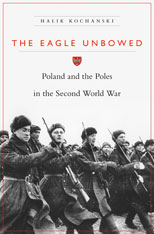 “The biggest gap in most histories of the second world war is what happened to Poland. By the war’s end it had lost not only a fifth of its population but also its freedom—despite having fought from the first day to the last against the Germans… But until Halik Kochanski’s The Eagle Unbowed nobody had written a comprehensive English-language history of Poland at war. A British-born historian whose own family’s experiences dot her pages, she weaves together the political, military, diplomatic and human strands of the story. She ranges from the fatal weaknesses of pre-war Poland (divided, cash-strapped and isolated) to the humiliation of Britain’s victory parade in 1946 when the organizers invited Fijians and Mexicans, but not Poles. Readers reared on Western accounts of a war between good and evil may be shocked to learn that for Poles the war was three-sided. The Western allies were duplicitous and the Soviets for the most part as bad as the Nazis… Kochanski gives admirably clear accounts of the battlefield. She unpicks other tangles too: the tense relationship between the impatient, ill-informed underground leadership in Poland and the divided, ill-led exiled government in London, sidelined and then dumped by the allies as the Soviet armies marched west… She uncovers details that will surprise even history geeks… Kochanski marshals an impressive and comprehensive array of English and Polish material.”—The Economist

“Kochanski tells Poland’s 20th-century story in absorbing detail, from the rebirth of modern Poland in 1919 to the collapse of the Soviet empire in 1989. But her great interests are the war years, 1939 to 1945, and the multiple and repeated atrocities inflicted upon the Polish people… Kochanski…compellingly conveys Poland’s wartime agony and the ordeals of those caught between Nazi Germany and Soviet Russia.”—Daniel Ford, The Wall Street Journal

“Owing to the nature of the subject, The Eagle Unbowed is an extraordinarily ambitious book. Kochanski sets out to pull together, for the first time in English, the many different strands of the Polish war experience. These include, among other things, the stories of the German occupation of Western Poland, the Soviet occupation of Eastern Poland, the Holocaust, the Polish pilots who fought in the Battle of Britain, the Polish infantry who fought with the Allies at Monte Cassino, the Polish soldiers who fought with the Red Army, and the Polish Home Army—the military wing of the underground Resistance—which suffered extraordinary losses during the Warsaw Uprising in 1944… She also moves deftly between individual stories and wider themes… Here, for the first time in English, the entire Polish experience of the war is captured in a single volume. The result is a book far bleaker, and far more ambiguous, than anything most Americans have read about the war… Kochanski tells the story of the war from the perspective of the people who lived between the two great totalitarian powers [Russia and Germany] and who suffered the most from their murderous politics… Her story is about Poland, the Polish state, the Polish armies, the Polish population, and—inevitably—the nature of Polishness itself… The Eagle Unbowed is one of the first books to make comprehensive use of the many new sources in English, putting a complicated story into a clear narrative.”—Anne Applebaum, The New Republic

“[Kochanski’s] book is opinionated, fluid and forceful. It lays out in impressive detail how ordinary Poles lost the Second World War, kept losing and yet refused to be beaten.”—Olivia Bullough, New Statesman

“Given the unending flow of misconceptions about wartime Poland, a comprehensive survey of this neglected subject is long overdue, and Halik Kochanski’s study fits the bill… Kochanski has a good chance of reaching a wide readership.”—Norman Davies, The New York Review of Books

“Poland fought from the first day of the second world war until the last—and lost a fifth of its population. The first comprehensive English account of Poland at war weaves together the political, military, diplomatic and human strands, interspersing them with observations drawn from the author’s family experiences.”—The Economist

“This is a comprehensive study that provides a fair-minded introduction to the subject.”—Richard J. Evans, The Guardian

“Kochanski’s extraordinary achievement is to bring together the threads of a story only known in fragments or through well-meaning fictional versions like Ian Serraillier’s The Silver Sword. This is the first fully comprehensive account in English of Poland’s war. It is also a brilliant exercise in historiography, showing how the myths and misconceptions that surround the Polish story were constructed and reinforced.”—Brian Morton, The Herald (Scotland)

“A nation long accustomed to being squeezed by its two powerful neighbors, Germany and Russia, Poland’s plight has not been adequately highlighted in more sweeping, general histories of World War II because much of its suffering during the war has been diffused by the allegations of Polish anti-Semitism. Royal Historical Society fellow Kochanski, while of Polish descent, is not an apologist of the well-documented persecution of the Jews by ethnic Poles resentful of Jewish prosperity during the 1920s or the willing collaboration of some Poles when the Nazis invaded in 1939. Instead, she fashions a clear-eyed, rigorous look at the horrendous toll the Nazi invasion and occupation took, as well as that of the subsequent Soviet opportunistic grab at territory and influence that extended well into the Cold War. After finally gaining a modicum of independence after World War I, with the accommodation of its many minorities, Poland remained poor economically and weak militarily and was powerless to withstand the renewed expansionist plans of her two hostile neighbors. The country’s worst nightmare came true with the blitzkrieg of September 1939 and the Soviet invasion from the east, ostensibly to protect the Ukrainian and Belorussian minorities; despite British protestations to the contrary, Poland was largely abandoned. Kochanski pursues the deportations of thousands of refugees and prisoners into the Soviet Union and the executions and gassing by the Germans. The author also unveils the spirited contribution to the Allied war effort by exiled Poles such as in the RAF and intelligence, and she reports extensively on the Warsaw uprising and the end-of-war confusion… An important study of a long-suffering country that has gained closure from the war only recently.”—Kirkus Reviews

“Kochanski, a British military historian, integrates concise, clear, and persuasive campaign analyses with an account of the brutality suffered by Poles under German and Soviet occupation during WWII. She also examines the complex internal politics of Poland’s armed forces in exile, and Poland’s international position. She incorporates the creation and performance of the 1st Polish Army on the Eastern Front into a narrative that in most Western accounts is too often dominated by action in Italy and Northwest Europe. Her treatment of the Polish Resistance and the 1944 uprising is excellent. She also establishes the complex mix of operations, logistics, and politics behind the Allies’ limited support for the Home Army in Warsaw. Kochanski’s sympathies clearly lie with Poland’s exile government in London, but she neither conceals nor trivializes policies and decisions that often proved self-defeating. Kochanski also gives an account of the Holocaust and the thorny issue of Polish collaboration in it. Above all, this is a story of expedience: ‘the critical decisions that had to be taken, the terrible role of sheer chance, …the simple desire to survive under the most difficult circumstances.’ And expedients, as Kochanski ably demonstrates, are not always wise.”—Publishers Weekly

“An unmatched synthesis of Poland’s wartime experience and fate. Kochanski deftly integrates operational analysis with the complex internal politics of Poland’s armed forces in exile. Her campaign narratives are concise, clear, and persuasive; her account of the Polish Resistance and the 1944 uprising is excellent; and her treatment of Polish–Jewish relations is balanced without being anodyne.”—Dennis Showalter, author of Hitler’s Panzers

“An informative, authoritative and wide-ranging account of the tragedy that befell Poland and its inhabitants—gentiles and Jews—during the war and its aftermath. The less-well-known story of the Poles deported to the Soviet Union is particularly vivid and moving. An engaging and important book.”—Hubert Zawadzki, author of A Concise History of Poland