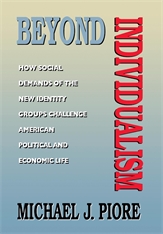 The Reagan and Bush years have left us with a troublesome dilemma: how to balance our budget deficit against our social deficit. This book takes up the urgent question of how, in a time of economic crisis and constraint, we can meet the pent-up demand for spending on our nation’s neglected poor, infirm, and disadvantaged, old and young. Michael Piore’s ambitious response is to develop a new social theory that balances individual preferences against the claims and responsibilities of the community. By explaining the role of groups in economic and social life, this theory makes sense of a host of perplexing social phenomena and policy issues, from equal employment opportunity to international competitiveness to the decline of organized labor, from multicultural education to health insurance to the underclass.

Piore traces our difficulties in addressing these issues to the limits of liberal social theory, particularly its sharp distinctions between individuality and community. He offers an alternative view of individuality as emerging through the discussions and debates conducted among a community’s members. These discussions, Piore suggests, have turned inward, away from the borderlands where social groups and economic organizations meet—and therein lies the crux of some of the country’s deepest political and economic problems. His book points beyond the liberal conception of politics as a negotiation among competing interests and of policymaking as technical decisionmaking. Instead, it prescribes a politics focused on the process of discussion and debate itself, a politics that enlarges the borderlands by broadening the range of people who talk to one another and the range of topics they address.