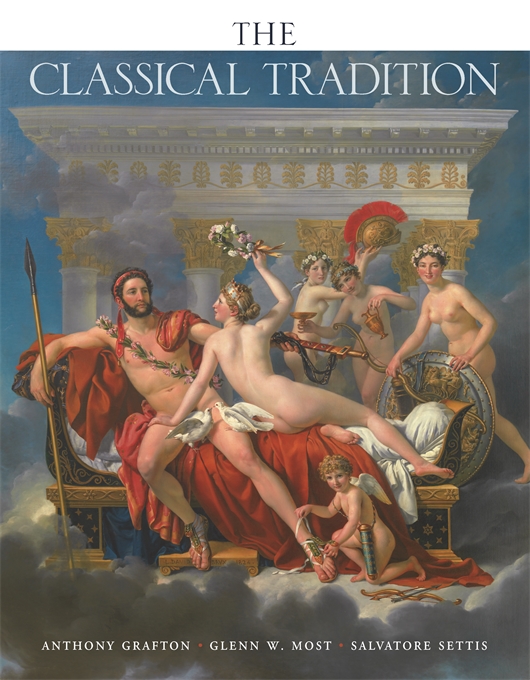 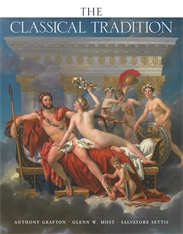 “Over a thousand pages in length, with some five hundred articles surveying the survival, transmission, and reception of the cultures of Greek and Roman antiquity, The Classical Tradition is a low-cost Wunderkammer, a vast cabinet of curiosities… The Classical Tradition should rightly evoke…gratitude. This is a book whose long, learned, and witty essay on Rome could stand alone as a surprisingly comprehensive guide to that city’s ancient relics, but that also has time for entries on Armenian Hellenism, Hunayn ibn-Ishaāq, and Gandhara; carpe diem, deus ex machina, and the translatio imperii; the Society of Dilettanti, the Grand Tour, and Fascism. It is possible to get pleasantly lost in these pages, as in the internal courtyards of Pompeii, and not emerge for hours.”—Stephen Greenblatt and Joseph Leo Koerner, The New York Review of Books

“A heady, hefty new single-volume reference… This is a browser’s paradise… While Greece and Rome are no longer the foundation of education, classical scholarship has never been richer.”—Steve Coates, The New York Times Book Review

“Entries of commendable clarity and range include those on Homer, on pastoral, on Catullus, and on the Argonauts. This is a valuable reference work, especially for those new to the classical world.”—Victoria Moul, The Times Literary Supplement

“The Classical Tradition is a guidebook of great erudition that is notably well written and unexpectedly compelling. It definitely is not another of those solemn introductions to ‘the glory that was Greece and the grandeur that was Rome.’ Instead it is a lively compendium of the manifold ways in which the enduring creations of the classical tradition, and the Greek and Latin classics, have been imitated, adulated, denounced and misunderstood—or understood all too well—over the past two millennia… Each article brings some unexpected insight or little known fact into the discussion, to illuminating effect… The scholarship is impeccable, but there is a donnish drollery in many of the articles… [A] marvelous guide.”—Eric Ormsby, The Wall Street Journal

“Now here is a fabulous book—and a bargain to boot. Harvard has produced this gigantic volume, packed with color plates and essays by some of the greatest scholars alive, for the price of a couple of hardback thrillers. Better still, while The Classical Tradition may look like a work of reference, it’s actually one of the best bedside books you could ask for. I know because I’ve been browsing around in it with immense pleasure… Certainly anyone even mildly interested in the Western cultural heritage will find The Classical Tradition a necessary purchase… [It] shows us how deeply the stories, iconic figures and ideas of antiquity succor our imaginations and still suffuse the world we live in.”—Michael Dirda, The Washington Post

“[The Classical Tradition’s] catalogue of contributors is a who’s who of classical scholarship and includes some of the best known scholars writing for an educated non-specialist public, such as Ingrid Rowland, Simon Goldhill, Mary Beard and Glen Bowersock… [The editors] have sourced not so much anodyne entries on set-piece subjects—the staple of any encyclopedia—as stories brightly told that move through time to relate, for example, the achievements of the Roman poet Horace as they were seen in the ancient world, followed by an assessment of his immediate influence on Latin poetry, and his considerable impact on subsequent poets from Petrarch to Joseph Brodsky, with a slight pause over the case of Byron, who loathed Horace after their encounters in school… The publication of this Harvard guide not so much to the classical past as to the uses we have made of it—its various metamorphoses—is in itself a cultural event. Consider it one among many markers of a contemporary re-attachment to the classical past.”—Luke Slattery, Australian Literary Review

“If, as some classicists say, our minds, bodies, government, law, medicine, arts, and fill-in-the-blank are unintelligible without an understanding of the Greco-Roman heritage, then do not waste another minute in ignorance and read this massive work, or at least selections of it, with urgency. A team of distinguished scholars—rivaling the number of warriors in the Battle of Thermopylae—dispenses knowledge and opinions on every imaginable topic under the Classical sun, connecting us to our ancient bloodline.”—Christopher Benson, First Things

“Eclectic rather than exhaustive, the compendium is less an encyclopedia than a buffet, in alphabetical order, of topics and glosses. There is, fortunately, no ideological consistency or purpose. The harvesting academics bring home a bumper crop to remind and instruct the reader of how the Classics are still central to the civilized intelligence; food for thought and primers of the imagination.”—Frederic Raphael, Literary Review

“Anthony Grafton’s entry on Historiography is as elegant and learned as everything he does. So elegant and learned, in fact, that I wanted to read each and every essay he had written in The Classical Tradition… Being lost in this book can be invigorating.”—Brendan Boyle, New Criterion

“A stunningly wonderful compilation… Massive in length and unimpeachable in scholarship, it nonetheless manages to be endlessly absorbing, and often quietly entertaining into the bargain… I’ve pored over this book like a madman ever since setting hands on it and I’ve devoured enough to be certain that it’s a masterpiece of concision, knowledge, judgment and dedication. It’s clearly going to be a companion for life, and all the better for being well-nigh inexhaustible.”—Bradley Winterton, The Taipei Times

“This absorbing and endlessly browsable compendium, edited by Anthony Grafton, Glenn W. Most, and Salvatore Settis, explores the richness of our classical legacy through scores of essays, alphabetically arranged by subject, that illuminate our past, our present, and probably our future as well.”—Barnes & Noble Review [12/03/10]

“This magnificent compendium explicates the outsized influence Greek and Roman society, literature and myth has had on the medieval and modern European ages that followed, and in turn on the imperial culture exported around the world. The Greek gods and their attributes—from wise Athena and fierce Ares to bibulous Dionysus—are key elements in a worldview we still look back on, at once alien and familiar. A wonder of research and writing that connects both casual browser and scholar to centuries of learning.”—Barnes & Noble Review [01/02/12]

“Whether priced by the pound or the page, this hefty compendium is quite a bargain. Lead editor Grafton…is perhaps the perfect captain for an ambitious work that attempts to capture, as the preface indicates, the ‘reception of Graeco-Roman antiquity in all its dimensions in later cultures.’… More than 150 color images only add to the browsing pleasure.”—B. Juhl, Choice