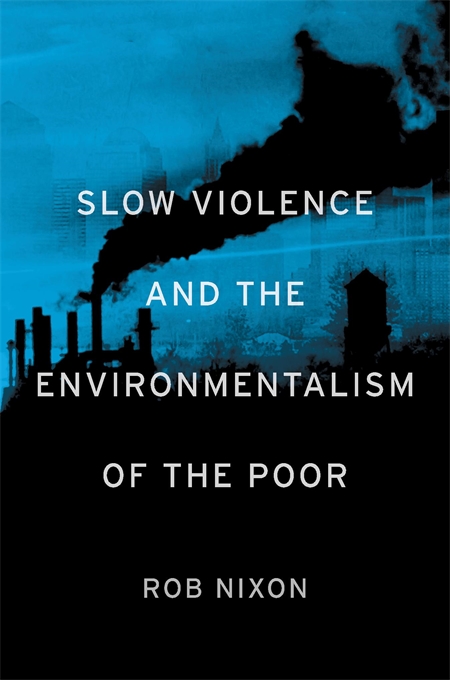 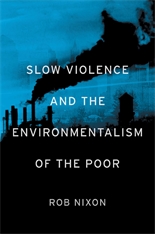 Slow Violence and the Environmentalism of the Poor

“Slow Violence is an important contribution to the growing field of ecocriticism… Nixon further broadens the scope of ecocriticism by bringing postcolonial studies to the table… Nixon’s Slow Violence is the first book in environmental literary studies to explore the connection between natural resource extraction and petro-imperialism… Slow Violence eschews dense prose and indecipherable academic jargon for the rigorous, clear writing of someone with the mind of a critic and the heart of a humanist. From now on, thanks to this book, no discussion on environmentalism would be complete without taking slow violence into account.”—Subhankar Banerjee, The Los Angeles Review of Books

“This is a fine book, disturbing and revealing in content, and worthy of lengthy study.”—Jules Pretty, Times Higher Education

“Slow Violence will, I think, become what it aspires to be: a foundational text of an ‘environmental humanities’ that also conjugates ecologism, anti-imperialism and anti-capitalism, to be achieved through a ‘creative alliance’ between environmental and postcolonial studies, two protagonists accustomed to ignoring each other.”—Mary Louise Pratt, Interventions

“The previously published sections of Slow Violence and the Environmentalism of the Poor placed Nixon in the vanguard of a movement to make ecocriticism and environmentalism more attuned to imperialism (past and present), to related global injustices, and to postcolonial literatures. The book itself ensures his position among the most prominent voices of what has come to be known as postcolonial ecocriticism, part of a larger effort to open ‘up paths, inside the academy and beyond, to more diverse accommodations of what counts as environmental.’ Yet, even by the standards of this field, Slow Violence is impressively interdisciplinary and activist. Not only does it draw extensively on environmental history, the social sciences, and various kinds of journalism, it also offers keen historical and sociological insight into pressing contemporary issues. Slow Violence will be engaging and accessible to all those working in academia and beyond who are interested in social justice and its relationship with environmental change. In fact, in his role as a public intellectual, in his clear and elegant prose, and in his commitment to anti-imperial scholarship and activism, Nixon effectively follows in the footsteps of Edward Said, even as he moves to address a blind spot in Said’s writing and (until relatively recently) in postcolonial literary studies: the significance of slow environmental violence for understanding imperial relationships and the often repressed ways they have shaped and continue to shape the globe.”—Byron Caminero-Santangelo, Research in African Literatures

“I thought the book was worth buying for its introduction alone, which presented the idea of slow violence and the practical and political challenges behind fighting it. The chapters that follow are a gallery of horrors: one scene of violence after another, each seemingly insurmountable and somehow less surprising than the last. Yet, remarkably, this is the least depressing environmental book I’ve read in years. By presenting these disasters alongside the writer-activists working to counteract them, Nixon leaves no room for despair. Instead I’m left buoyed, hopeful and—after 300 pages—impatient to learn more.”—Blair Braverman, Waging Nonviolence

“The work is groundbreaking in its call to reconsider our approach to the slow rhythm of time in the very concrete realms of environmental health and social justice, as well as its investigation of both the power and challenges inherent in creative representation… Slow Violence and the Environmentalism of the Poor challenges readers to new modes of thinking through grave realities. In so doing, it makes a fundamental contribution to contemporary debates.”—Monica Seger, World Literature Today

“Slow Violence is inspiring, innovative, and passionate. Nixon forces us to confront some of the most urgent issues facing the continued existence of humans on the planet. He re-energizes environmental literature, infusing the field with the transnational concerns of world literature, and creatively reinvigorates post-colonial studies.”—Hazel Carby, Yale University

“Nixon jumpstarts a conversation between the fields of eco-criticism and postcolonial studies, and the outcome is brilliant. A landmark achievement, directed with great care, lucidity, and no end of foresight.”—Andrew Ross, New York University

“How can we dramatize slow violence? This beautifully written book shows how writers have conjured the invisible environmental calamities that have come to be the hallmark of modern times. The damage in question is out of sight—and out of mind for the global elites who command center stage. Nixon’s evocative prose redoubles the charge of the writers who fight to show us the central challenge of our era. Everyone should read this book.”—Anna Tsing, author of Friction: An Ethnography of Global Connection