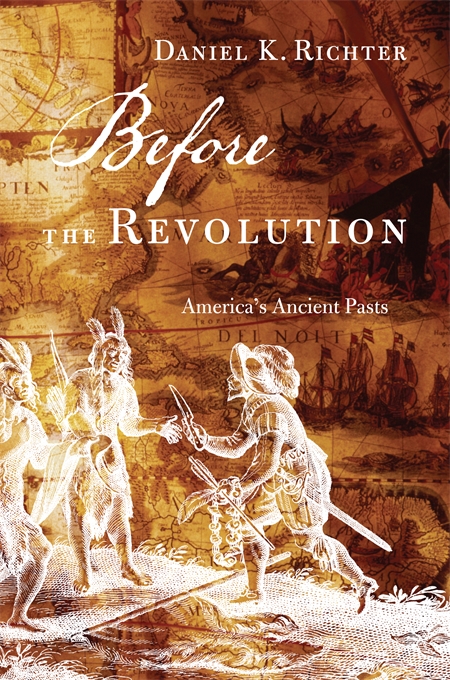 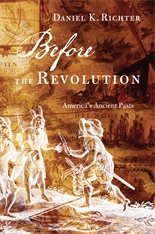 “An elegantly written attempt to see colonial America from the indigenous perspective… In Richter’s grand system, the continent’s history comprises successive waves of adventurers, one atop another. Although the American Revolution ‘submerged these earlier strata,’ he argues that they nonetheless ‘remained beneath the surface to mold the nation’s current contours.’ Walking atop the topmost strata, in other words, are thee and me, the terrain around us shaped by those who came first. The approach is bold, original and insightful… [A] masterly account… Before the Revolution is a book that by its very boldness invites intelligent argument. Every few decades, historians develop a new way of looking at the past. I am not talking about ‘revisionism’ but unifying conceptual schemes, the sort of mental framework that Frederick Jackson Turner created in his argument for the importance of the frontier to our history or that Bernard Bailyn established in his studies of the American Revolution’s ideological origins. Historians debated Turner for a long time and continue to debate Bailyn. I wouldn’t be surprised if they were arguing with Richter a decade from today.”—Charles C. Mann, The Wall Street Journal

“Ultimately, [Richter’s] history is a history of violence, of violence perpetrated by Europeans against Native Americans, by Native Americans against Europeans, and by both peoples against their own kith and kin. It is a dark and brutal story, although one in which the Native Americans are shown as for long holding their own, manipulating Europeans as trading partners and playing off one set of Europeans against another until the overwhelming British victory of 1763 no longer made this possible. There is precious little uplift here, and little sense of the more constructive characteristics of the brave new world that was rising amid the wreckage of the old. But, in patiently uncovering the layers beneath the rubble, Richter forcefully brings home to us that the American past belongs to many peoples, and that none should be forgotten.”—J. H. Elliott, The New York Review of Books

“The core of the work is a vivid, well-paced, stimulatingly opinionated and provocatively selective history of colonial Anglo-America… [A] spirited and engaging history of British North America… Richter’s trenchant language excites enthusiasm. He evokes picturesque episodes engagingly—the agonies of Roanoke, the role of European goods in Powhatan power structures, the peripeties of indentured servants, the intolerance of Protestant fanatics, the poverty of seventeenth-century colonial home life, and the struggles of proprietors, rebels and crowns.”—Felipe Fernández-Armesto, The Times Literary Supplement

“So far it is one of my two or three favorite non-fiction titles of the year… Definitely recommended.”—Tyler Cowen, Marginal Revolution

“The most important history books make us rethink things we think we know. In Before the Revolution: America’s Ancient Pasts, Daniel Richter shows us a land built by successive waves of adventurers, immigrants and merchants, one atop the other. He insists on the primacy of human action in history—something not always popular in academia today.”—The Wall Street Journal

“An astute, thoroughly enjoyable mixture of political, economic and social history that culminates in a turbulent 18th-century North America whose people did not consider themselves on the verge of revolution but knew that things were not right.”—Kirkus Reviews (starred review)

“[Richter] demonstrates that U.S. history did not begin with the American Revolution, convincingly arguing that the ideas that manifested themselves in the mid-18th century with the rebellious colonists had their origins in such varied locales as the Mississippian Southeast and Europe of the Middle Ages… Any history written by this preeminent historian is an essential read for everyone interested in the deeper history of the United States.”—John Burch, Library Journal

“With breathtaking sweep and profound learning, Daniel K. Richter synthesizes the histories of Europe, North America, and the Atlantic world from the late Middle Ages to the late eighteenth century—and he does it in ways that no previous writer has managed, without carving his story into discontinuous regional narratives or succumbing to the teleology of the American Revolution. This book is nothing less than a masterpiece.”—Fred Anderson, author of The War That Made America

“By placing early American history fully in its Atlantic contexts and seeing all participants as historical agents, Before the Revolution allows us to understand the genuine parallels as well as the contrasts in the experience of Americans through their layered pasts.”—Karen O. Kupperman, author of The Jamestown Project

“Once every quarter-century or so, a book of great sweep and synthetic sophistication bursts onto the scene to recast our understanding of early American history. This masterful study, with its startling comparisons of European patterns of conquest, colonization, chaos, and cultural convergence, is a must-read.”—Gary Nash, author of The Liberty Bell