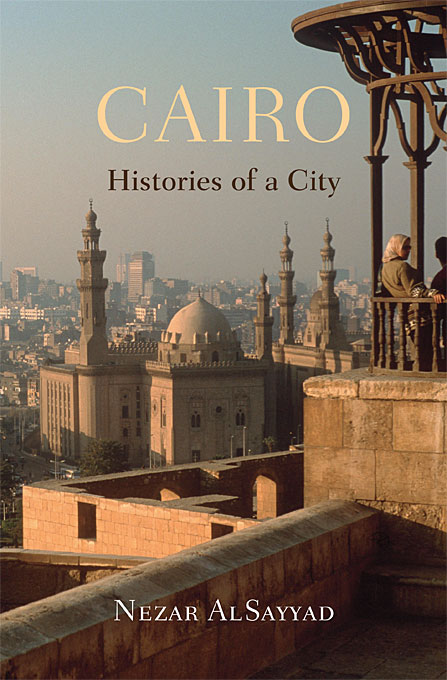 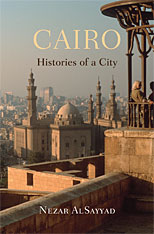 Histories of a City

“AlSayyad presents a deeply knowledgeable yet highly personal account of the city’s history in its various reincarnations—from Memphis, the first capital of united upper and lower Egypt, founded by the Pharaoh Menes around 3100 B.C., to the present… The book is profusely illustrated with maps and photographs, most of them taken by AlSayyad himself. They add enormously to the value of the text, bringing the descriptions of buildings and streets alive with color. Just as the text narrates the history of Cairo from a personal point of view, the photos indicate the standpoint of the photographer as much as they illustrate the text. Some are standard shots of buildings familiar to anyone who has visited and walked around Cairo. The best include the people of the city and their relationship to its historic monuments… [This is] a book of magisterial scope. Those who plan to visit Cairo should read this book first. Those who have visited often or lived there for years will find new appreciations for aspects of the city they know, as well as features they never previously encountered.”—Joel Beinin, The San Francisco Chronicle

“AlSayyad’s book, a colorful sweep of over 3,000 years of urban and architectural history, is as much a short genealogy of Cairo’s many commentators and portraitists as it is of its buildings. He narrates a broad history of urban development from the Pharaonic capital of Memphis, ‘the first Cairo,’ on the Nile’s west bank, to the Ptolemaic, Roman-Byzantine and Arab-Islamic cities that developed on top of and adjacent to each other on the river’s east bank. Each chapter begins at an iconic Cairo landmark and tells a history of the building’s era, bringing in both neighboring architecture and contemporary voices.”—Frederick Deknatel, The National

“A timely and often surprising series of vignettes serving to trace the physical and cultural evolution of the city from the pharaonic period to the present. Each of the dozen vignettes covers a specific historical period, and AlSayyad includes many fascinating details about historical figures and their impact on the city as it grew from a tiny settlement to a great metropolis. Much of the narrative is driven by the observations and activities of contemporary residents or visitors to the city. Ibn-Khaldun, the renowned Arab traveler and historian, is utilized to provide views of medieval Cairo in the 14th century under the rule of Mamluks. This is an enjoyable tribute to a great, vital city that remains, sadly, unfamiliar to most Westerners.”—Jay Freeman, Booklist

“This ambitious, timely volume attempts the colossal feat of tracing the history of Cairo, from its ancient to modern incarnations, through a case-study approach to its urban landscape… This work provides a lucid overview of Cairo’s architectural and political history, and some food for thought.”—E. A. Waraksa, Choice

“[An] exceptionally absorbing and astute, cultural and architectural history of one of the world’s most captivating cities… AlSayyad structures his book smartly by place rather than strictly by period: each of the 12 chapters brings the reader to a new section of Cairo in an inviting, informed journey through its development. He introduces readers to the history and architecture of, among others, Coptic Cairo; the noted mosques of al-Azhar and a-Anwar; the Gezira Palace; and medieval Cairo. The final chapters, on the eras of Nasser and Mubarak, are especially gripping; AlSayyad warns that the city has been given to a ‘new elite’ and the preservation of old Cairo for tourists is turning it into a Disney-like theme park. An important second thread of the book sees Cairo as inspiration for artists such as Jean-Léon Gérôme and writers Naguib Mahfouz and Alaa Al Aswany. The author’s writing is elegantly clear and evocative, drawing the reader into the ‘messy and difficult’ but ‘vibrant and innovative’ city, leaving one wanting to know what he has to say about the politically transformed city’s future.”—Publishers Weekly

“In the voluminous literature on Cairo, when one would have thought everything had already been said (and oft repeated), here comes a new, quirky, original book that takes flight over the full, if fragmented, range of the region’s histories. I can think of no other biography of the city that touches on the entire time range between pharaonic and modern times and straddles both sides of the changing course of the Nile and the desert outreaches. AlSayyad is sensitive to themes of Egyptian cultural continuity and the country’s ongoing contradictions between openness and tolerance, on the one hand, and fierce religious sectarian and ideological shifts on the other.”—Janet Abu-Lughod, Department of Sociology, The New School

“Nezar AlSayyad establishes new intellectual horizons which allow him to narrate urban history with its complex social and political dimensions through the architecture of the city. In this tour de force, AlSayyad opens our eyes and minds to Cairo’s place and time in the larger history of humanity.”—Gamal al-Ghitany, author of Zayni Barakat and Khitat al-Ghitani

“This is a book as grand as the city it describes. In telling the story of Cairo, Nezar AlSayyad places in the foreground its great architectural monuments and the historical figures who shaped its growth. These are drawn against a rich background portraying the broader political history of Egypt. Cairo: Histories of a City captures both the built detail and the historical landscape of a remarkable metropolis.”—Timothy Mitchell, Department of Middle East and Asia Languages and Cultures, Columbia University

“Nezar AlSayyad’s invigorating and innovative new account of Cairo adroitly interweaves stories of the city’s people and places with those of the city’s storytellers. Cairo encompasses the entire life of the great metropolis, and AlSayyad meticulously sets right myths and misconceptions about the City Victorious and its monuments. This will be the standard account for years to come.”—Dell Upton, Department of Art History, University of California, Los Angeles