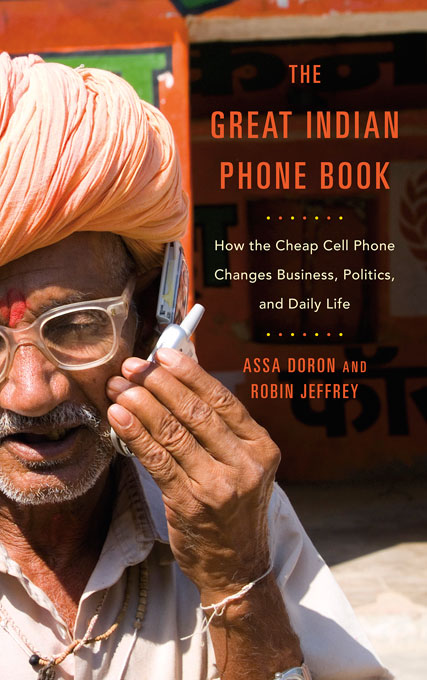 “The conversation about [the cellphone’s] social effects usually takes the form of lamenting obnoxious people who text over dinner or hold one-way conversations on the elevator and expressing angst about ‘kids these days’ and their addiction to their mobile devices. Fortunately, we now have Assa Doron and Robin Jeffrey’s The Great Indian Phone Book, which offers a comprehensive look at what cell phones have meant for India. Their story covers everything from family relations and gender barriers to terrorism and the relations of citizens to the state. Out of what could have been a dry study packed with statistics the authors have managed to write a superb book—informative, insightful, witty—that is essential reading for anyone interested in India, or technological change, or good stories told with clarity and purpose.”—Isaac Chotiner, Wall Street Journal

“Superb… Reminds us how little we have explored the new landscape of opportunity, aspiration and, inevitably, disappointment that mobile phones have opened up in India… [A] lively book.”—Pankaj Mishra, Bloomberg.com

“The Great Indian Phone Book is actually two books in one. The first half is a whirlwind recap of how India was connected, told simply and with a wealth of numbers. The second is an ethnographic study that dives into the intricacies of Indian society without pretending to be comprehensive… The strength of the book lies in its repeated emphasis on technology as something that ‘does not eliminate political and social structures, though it may modify them.’”—The Economist

“The Great Indian Phone Book is admirably comprehensive, unexpectedly engaging, and underscored with an appreciation for the country Doron and Jeffrey have spent several decades of their professional lives studying as a historian and an anthropologist, respectively.”—Swati Pandey, Los Angeles Review of Books

“Over the past ten years the number of mobile phone subscribers in India has grown from a few hundred thousand to as many as 900 million—three subscriptions for every four Indians of any age. It’s…a phenomenon with deep and significant cultural effects. Doron and Jeffrey attempt to chart the pulse of these changes, looking at the history of long-distance communication in India and the ways person-to-person information has been controlled and consumed by both the élites and the masses.”—Nate Barksdale, Books & Culture

“A timely and pioneering contribution to the green shoots of telecom literature… The book has been written for the general reader who is curious to know about the mobile revolution but cannot make sense of the numbers, charts, graphs, jargons, legalese and sophistry surrounding much of the writing on the topic… By representing a wide range of individuals and communities which have been affected by the mobile revolution in India, by judging the impact against the bedrock of existing social, political and economic structures and by suggesting realistic but complicated answers, and yet, keeping the narrative jargon and statistics free, the authors have done a remarkable job.”—Subhjayoti Ray, Economic and Political Weekly

“This is an important book that can usefully be read by students, social scientists, and business managers—indeed, by anyone interested in change and its effects on developing and complex societies.”—Denis O’Brien, Finance & Development

“The book makes for fascinating reading and probes the entire universe of the mobile phone in India, the upside and the downside.”—Dilip Bobb, Financial Express

“This terrific book on the mobile revolution in India provides not just sound scholarship but also an engaging read for a broader audience, a rare double feat.”—Madanmohan Rao, Your Story

“In this fine anthropological study, Doron and Jeffrey look at how the introduction and current widespread use of the cell phone has altered life in one of the world’s largest countries… This rich study reveals much about modern India and should be read by both students and scholars of technology and South Asia.”—Publishers Weekly

“Doron and Jeffrey’s landmark study of how the humble mobile phone is changing the culture of Indian democracy in everyday life has no competitors. Their interdisciplinary analysis of popular aspirations and anxieties surrounding mobile telephones will invite and inspire comparative studies set in other emerging economies. A remarkable achievement.”—Dipesh Chakrabarty, University of Chicago

“The Great Indian Phone Book is a wake-up call for anyone intrigued by today’s network society. Engagingly written, intelligently researched, and enlivened with memorable anecdotes framed by deft exposition, it offers up a compelling and compellingly readable introduction to a subject of unquestioned significance: the remarkable emergence of the mobile telephone as an agent of change in the developing world.”—Richard R. John, author of Network Nation: Inventing American Telecommunications

“An engaging and informative analysis of the use of cell phones in India, a nation of over one billion people, where this small device has been a harbinger of big social and economic changes—and an enabler of unbridled entrepreneurship.”—Tarun Khanna, author of Billions of Entrepreneurs: How China and India are Reshaping Their Futures—and Yours

“This is a fascinating, smart, and erudite volume on how the Indian cell phone industry developed and what its extraordinary growth has meant for the country. It can serve as a kind of vade mecdum for many thousands of interested readers seeking to learn about the subject, whether as amateurs or as specialists entering a new domain.”—Arvind Rajagopal, New York University