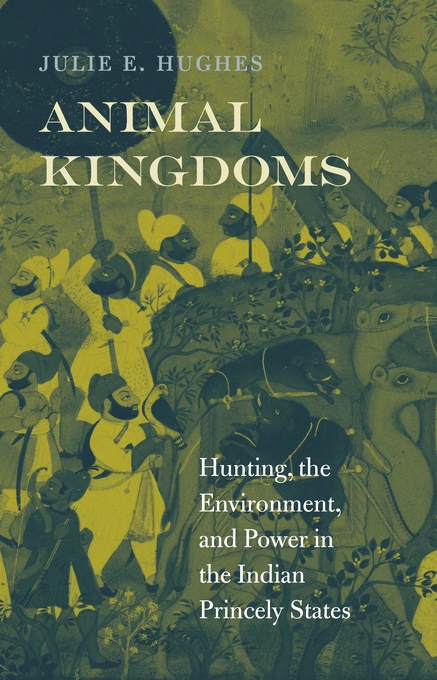 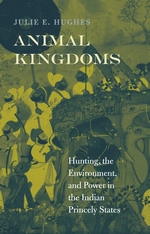 Hunting, the Environment, and Power in the Indian Princely States

One summer evening in 1918, a leopard wandered into the gardens of an Indian palace. Roused by the alarms of servants, the prince’s eldest son and his entourage rode elephant-back to find and shoot the intruder. An exciting but insignificant vignette of life under the British Raj, we may think. Yet to the participants, the hunt was laden with symbolism. Carefully choreographed according to royal protocols, recorded by scribes and commemorated by court artists, it was a potent display of regal dominion over men and beasts alike. Animal Kingdoms uncovers the far-reaching cultural, political, and environmental importance of hunting in colonial India.

Julie E. Hughes explores how Indian princes relied on their prowess as hunters to advance personal status and solidify power. Believing that men and animals developed similar characteristics by inhabiting a shared environment, they sought out quarry—fierce tigers, agile boar—with traits they hoped to cultivate in themselves. Largely debarred from military activities under the British, they also used the hunt to establish meaningful links with the historic battlefields and legendary deeds of their ancestors.

Hunting was not only a means of displaying masculinity and heroism, however. Indian rulers strove to present a picture of privileged ease, perched in luxuriously outfitted shooting boxes and accompanied by lavish retinues. Their interest in being sumptuously sovereign was crucial to elevating the prestige of prized game. Animal Kingdoms will inform historians of the subcontinent with new perspectives and captivate readers with descriptions of its magnificent landscapes and wildlife.