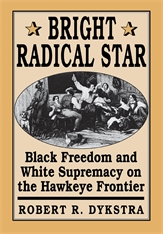 Black Freedom and White Supremacy on the Hawkeye Frontier

Bright Radical Star traces the evolution of frontier Iowa from arguably the most racist free state in the antebellum Union to one of its most outspokenly egalitarian, linking these midwesterners’ extraordinary collective behavior with the psychology and sociology of race relations. Diverse personalities from a variety of political cultures—Yankees and New Yorkers, Pennsylvanians and Ohioans, Southerners from Virginia and Maryland and North Carolina, immigrant Irish, Germans, Scandinavians—illuminate this saga, which begins in 1833 with Iowa officially opened to settlement, and continues through 1880, the end of the pioneer era.

Within this half-century, the number of Iowans acknowledging the justice of black civil equality rose dramatically from a handful of obscure village evangelicals to a demonstrated majority of the Hawkeye State’s political elite and electorate. How this came about is explained for the first time by Robert Dykstra, whose narrative reflects the latest precepts and methods of social, legal, constitutional, and political history.

Based largely on an exhaustive use of local resources, the book also offers cutting-edge quantitative analysis of Iowa’s three great equal rights referendums, one held just before the war, one just after, and one at the close of Reconstruction. The book will appeal to American historians, especially to historians of the frontier, the Civil War era, and African-American history; sociologists and others interested in historical perspectives on race relations in America will find it both stimulating and useful.