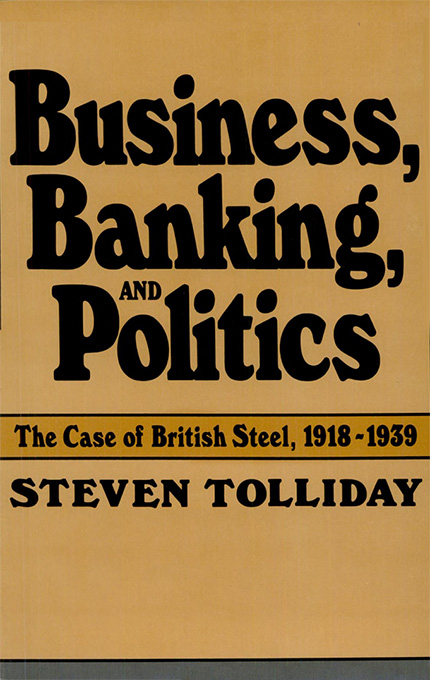 During the 1920s, the “black decade” of British steel, nearly everyone agreed that the industry’s revival depended on replacing obsolete equipment and instituting modern technologies that would increase production and decrease costs. Despite consensus, these goals were not reached and, even after wartime and postwar reconstruction needs were met, the industry continued its steady decline. Steven Tolliday advances three hypotheses for this stagnation.

First, the problems of British steel, Tolliday suggests, were embedded in the structures of individual firms and of the industry as a whole—both unchanged since the prosperous years of the nineteenth century—and after World War I fractured by conflicting interests (share holders, managers, family members, bankers, creditors). Second, the two external institutions that might have enforced reorganization and modernization—the banking system and the government—were overcautious, had complex and contradictory goals, and lacked the management skills to exploit their potential financial leverage. Third, the many attempts at reform by banks and government collapsed because these establishments, like the industry itself, were constrained by traditions and antiquated structural rigidities.

This excellent example of a new direction in business history—analysis of a given industry by conveying the interaction of technology, markets, companies, financial institutions, and government—brings many important theoretical questions into focus and also contributes substantially to the scrutiny of specific problems, such as why the British economy appears to be in irrevocable decline.