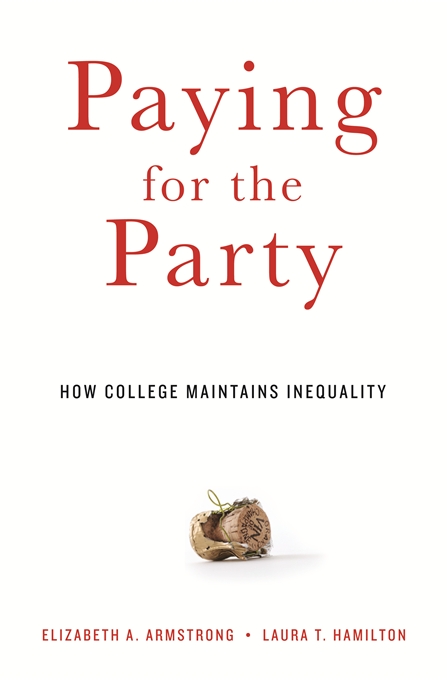 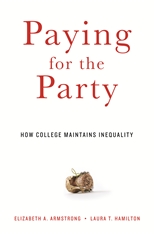 Paying for the Party

“Beautifully written, knitting together themes of social class, gender, sexuality, organizations, and education, the book is destined to be a classic… Its authors have cemented their status as experts on higher education.”—Amy J. Binder, Chronicle of Higher Education

“A striking new book… Although full of the comedies, rivalries and mini-dramas one might find in a high school movie or romcom, it is also a serious—and seriously depressing—study of American higher education.”—Matthew Reisz, Times Higher Education

“Paying for the Party is well written and perversely hard to put down. Readers who did their own share of partying in college may cringe in rueful recognition.”—Mary Taylor Huber, Change

“Instead of being a great equalizer, Paying for the Party argues, the American way of college rewards those who come not just academically but socially prepared, while treating working-class students more cruelly, and often leaving them adrift.”—Ross Douthat, New York Times

“Focusing on the pathways leading to the college experience, the authors reveal an honest, if at times unflattering, look at the reality of the academic experience for women of both high and low socioeconomic status. Packed in with the data derived from the authors’ interviews is an intimate portrait of the study’s participants combined with researcher commentary that clarifies what the data represent: an unsettling picture of universities failing to lessen the disadvantages facing many of their students… This work will provide spectacular insights into gender and schooling and serve as a useful example of how to report ethnographic research.”—Rachel Wadham, Library Journal (starred review)

“In typical frat parties, Armstrong and Hamilton see much that is wrong with college education today. Such parties allow daughters of the affluent to flaunt their social advantages while exposing the vulnerabilities of female students from less-privileged backgrounds. Unfortunately, the authors find such parties well established in the ‘party pathway’ through the university. Focusing on female students, the authors find from campus observations and interviews ample evidence that four years on the party pathway will open doors of power for the elite while stranding the wannabes with mountains of student-loan debt and few employment options for paying off that debt… A provocative exposé of socially polarizing trends in higher education—certain to spark debate.”—Bryce Christensen, Booklist

“Armstrong and Hamilton report the results of their five‐year study of a group of young women who began in the same freshman dorm but ended up in very different situations. The constraints of social and economic class remained formidable, and moving into the professional class seemed virtually impossible, especially for those women who followed what the authors call ‘the party pathway.’ Women from more privileged backgrounds survived their partying through school due to their more substantial support systems at home. We also see how difficult the college adjustment was for less talented students and for women from modest backgrounds and small towns… The conclusions are sobering, if not depressing. Armstrong and Hamilton assail the university itself for a number of failures, including an ineffectual system of student advising; a plethora of meaningless majors and courses designed to attract full‐paying students, many of whom have no intention of actually pursuing such a career; and its continuing support for the fraternity/sorority system, which the authors contend undermines the very academic mission of the university. Athletics take some major blame, as well. The authors also discovered that some of the women who transferred to regional campuses performed better and were happier.”—Kirkus Reviews

“Armstrong and Hamilton pepper the book with student interviews, and ultimately suggest substantial changes to university structure for creating an egalitarian, merit-based environment. The extensive research and approachable writing style make this book useful to any audience interested in learning more about social differences within the education system.”—Publishers Weekly

“With astute observations and insights, Paying for the Party sheds new light on the lived experiences of contemporary students. It is a very important piece of scholarship that will inform the national discourse on the current state of U.S. higher education.”—Richard Arum, author of Academically Adrift

“By focusing on the lives of young women who spent freshman year living on a ‘party floor,’ Armstrong and Hamilton help us understand critical issues facing American higher education, including the out-sized role of sororities and fraternities and how the values of affluent students coincide with the interests of universities to empower the ‘party pathway.’ Richly observed and vividly narrated, this is an important ethnography of American campus life.”—Steven Brint, University of California, Riverside

“In this bold book, Armstrong and Hamilton capture the strikingly different pathways women undergraduates can take through public universities—‘party,’ ‘professional,’ or ‘mobility’—and show how the dominant campus culture indulges the upper-middle class and limits the prospect of the upwardly mobile. The authors show the complex connections between parental resources, sociability, educational outcome, post-graduation lives, and the importance of the right brand of shoes. This book illuminates the realities of the college experience today, when an adult life without crushing debt is fast becoming the privilege of the few.”—Michèle Lamont, author of How Professors Think

“Paying for the Party is very provocative and should be read by every dean of students on every residential campus. At a time when women are making rapid progress in educational attainment compared to men, Armstrong and Hamilton show how young women’s academics, social lives, and labor-market opportunities get aligned in college—and what happens when they do not.”—Mitchell Stevens, author of Creating a Class