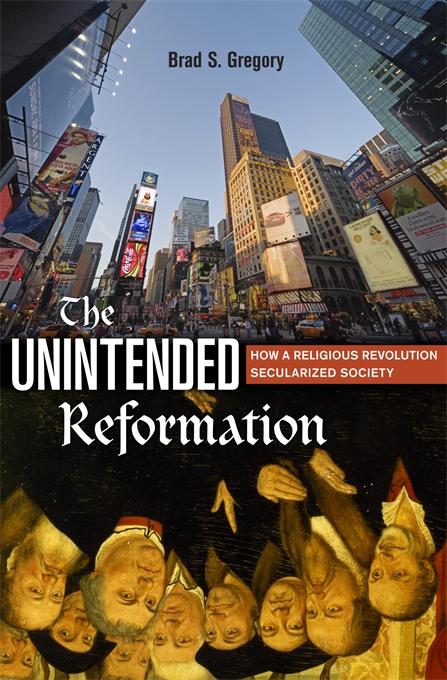 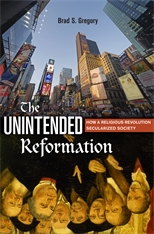 “This book is truly breathtaking in its scope, erudition and sheer nerve. There is no faulting Gregory’s grasp of Reformation history, but to his analysis of what has happened since there could be many objections raised. This is relatively unimportant, however. Max Weber’s The Protestant Ethic and the Spirit of Capitalism was not completely right either, but it was brilliant nevertheless. Gregory’s is a work not just of genuine scholarship but also of sincere moral purpose, which, even if it annoys, frustrates or fails to convince, has opened up an immensely important debate. There may yet be time to fix some of what went wrong in the Reformation.”—Lucy Wooding, Times Higher Education

“There could not be a more propitious moment for a book on greed and the historical roots of capitalism. Brad Gregory shows that historians have as much to contribute to contemporary debates about business and social ethics as most philosophers or economists… What is bold and unusual about The Unintended Reformation is that it comes from an explicitly Christian perspective and ends by arguing that only religion—properly understood as a doctrine of solidarity—can allow humanity to escape from the predicament of the modern, the material curse of poverty and the mental afflictions of prosperity. Gregory not only offers what is today a highly original combination of history and morality but also cogently explains why that combination is needed today.”—Harold James, Financial Times

“[An] extraordinary new book… But however brilliant is Gregory’s historical presentation (and it is brilliant), what ultimately distinguishes The Unintended Reformation is the sheer forcefulness of the narrative, which he pursues by examining the shift in perspectives on six distinct but interrelated themes since the sixteenth century: God, truth, institution, ethics, consumption and knowledge. The effect of this approach is to give the book an uncommon clarity: by going over what is essentially the single narrative in six different ways, each slight turn of the story illuminates the whole, and each new element comes across as both surprising and yet strangely familiar. The Unintended Reformation is unquestionably the most important contribution to the way we understand our present condition since Charles Taylor’s A Secular Age. But it is also as a stinging rebuke to all those well-nigh fictitious accounts of the emergence of the enlightened West out of the intellectual darkness and decrepitude of the Middle Ages that now distort our collective self-perception. Let’s hope Gregory’s book wreaks havoc on some of these myths that we persist in telling ourselves.”—Scott Stephens, Australian Broadcasting Corporation’s Religion & Ethics blog

“Charts how the godly Reformation led inexorably to the secularization of western society.”—Piers Paul Read, The Spectator

“Restrained and erudite… Apart from furnishing an interesting and well written account of the Reformation, the book is perhaps most interesting when [Gregory] grapples with his opponents… [A] thought-provoking book.”—Nick Carn, Financial World

“A lucidly written and far-reaching analysis that shows how the contemporary Western world continues to be influenced by the complex transformations that occurred in the 16th and 17th centuries.”—J. Werner, Choice

“The Protestant Reformation is considered by many to be one of the pivotal events in the history of the Western world. No one can doubt the central role that Luther, Calvin, and other reformers have played in the lives of Christians through the years… [Gregory] approaches the continuing impact of the Reformation in what he terms a ‘genealogical’ approach—one that sees the Reformation as the root of a tree whose branches reach into every aspect of modern life. Rejecting the ‘supersessionist’ view, that contemporary Christendom constitutes a radically new understanding of God and of the world itself, Gregory insists that our views, even our presuppositions, must be reimagined and re-evaluated in ways that demonstrate how the Reformation continues to reach into our theologies, our laws, our lives… [A] rewarding look at the long reach of history, and how we are the poorer for ignoring it.”—Publishers Weekly

“A work of deep moral seriousness. Gregory’s greatest contribution is his portrayal of the Reformation of Christianity as a central moment of disturbance and creativity in the modern Western world. In this endeavor, he has no equal among living authors. The Unintended Reformation is simply the most intelligent treatment of the subject by a contemporary author. It is also the most unconventional and most stirring engagement I know with the problem of how the West has dealt with its heritage of plural religions and concepts of values and happiness.”—Thomas A. Brady, Jr., author of German Histories in the Age of Reformations, 1400–1650

“A revisionist manifesto, sharp-edged and provocative, The Unintended Reformation analyzes the legacy of the Protestant Reformation with an eye firmly fixed on the present. Gregory challenges many revered assumptions and does so with verve and brilliance. Bound to stir debate for years to come, this magisterial history of the early modern era belongs on the shelf right next to Max Weber’s The Protestant Ethic and the Spirit of Capitalism and Charles Taylor’s A Secular Age.”—Carlos Eire, author of A Very Brief History of Eternity

“A strikingly brave and wide-ranging work, in which a distinguished historian of early modern Europe interprets the contemporary world. The precision and clarity with which Gregory lays out his evidence and the accuracy with which he handles materials in many different languages and of many different kinds give this original book extraordinary credibility. It’s rare for a book to attain this level of scholarship nowadays. An astonishing achievement.”—Anthony Grafton, author of Worlds Made by Words

“Gregory’s insightful and compelling narrative invites us to recognize the surprising extent to which we are still what the Protestant Reformation and its heirs made us, a society of conflicting and contested truth claims. As he spells out the consequences—and the interest is in the detail—we become more sharply aware of sometimes unrecognized aspects of our present condition.”—Alasdair MacIntyre, author of God, Philosophy, Universities