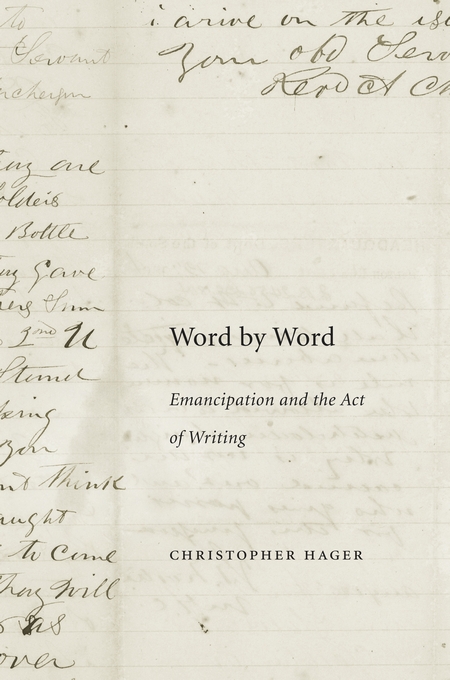 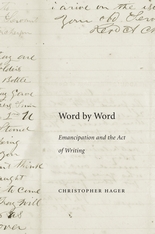 Emancipation and the Act of Writing

“Through a series of bold, imaginative and insightful case studies, Christopher Hager uncovers the intellectual world of U.S. slavery and charts the hopes, expectations and fears of enslaved writers… By understanding emancipation as a slow process rather than a rapid transformation, Word by Word shows how literacy was an incomplete and sometimes flawed instrument of black self-determination. The idea of emancipation as an unfinished revolution is not new, nor is the attention to subterranean networks of enslaved information and exchange particularly novel in slavery studies. By rendering legible and audible the writings of the literate minority, however, Hager reveals the desperate and creative measures taken by former slaves to assert their communal and individual voices. Most of course continued unlettered, but the striking improvement in black literacy during the two decades after emancipation (from 10 to 30 per cent) is testimony to the enduring importance attached to the written word and the empowering potential of African-American writing.”—Richard Follett, Times Higher Education

“Christopher Hager does a fascinating job of sifting through these letters [written by slaves], fleshing out as much as possible the stories of their authors, and casting it all as black America’s first attempts at forging a voice in this strange land, in Word by Word: Emancipation and the Act of Writing.”—Mark Reynolds, PopMatters

“While Frederick Douglass invigorated abolitionists with his eloquent prose, many of his contemporaries, still enslaved or recently freed, scrawled barely legible letters to friends and family sold to distant masters. In this revelatory hybrid of history and textual analysis, Hager argues that the act of writing—often in defiance of states’ antiliteracy laws—was an exceedingly potent form of self-empowerment for these oppressed men and women, never mind their poor spelling and unorthodox methods (one potter carved poetry into his work, another ‘composed at the handle of the plough’ and kept the lines memorized till he learned to write). Primary documents, intensely scrutinized, reveal powerful emotions and common hardships, bear witness to racial struggles across the country, and provide unalloyed insight into the stark yet hopeful reality after the Emancipation Proclamation. Particularly fascinating is the evolution of writing as a form of power: a former slave protests, via letter, to a Union general about Union soldiers attacking his neighbor’s wife, while another journals his integration into the U.S. Navy with perfunctory but increasingly assured entries. This thoughtful examination of the artifacts of a too-long-silenced population is made all the more eloquent by accompanying facsimiles of the arduously penned missives.”—Publishers Weekly

“Hager provides an informed and informative view of writings produced by formerly enslaved African Americans, often overlooked as an illiterate group. Hager reminds readers to attend to those texts that have the power to give scholars a broader perspective of particular moments… By paying attention to these authors, Hager aims to develop new models for the interpretation of historical sources and give voice to both the unknown and the underappreciated.”—T. T. Green, Choice

“[An] always engaging account of how the path to freedom was paved, in part, with written words.”—Kirkus Reviews

“Hager seeks to craft an intellectual history of a people too often dismissed as illiterate and lacking a culture of letters. His focus is not on stars who are well known from fugitive slave narratives, but on a handful of more or less literate blacks whose previously unpublished letters provide pieces of a complex and rich narrative of liberation. Hager discusses the mental process of writing, exploring the inner lives, secrecy, and subversion shown in black initiatives to learn how to write and how to use writing to end enslavement and to embrace emancipation.”—Thomas J. Davis, Library Journal

“From its first pages, where a stumbling black writer in Civil War New Orleans picks up the U.S. Constitution, Word by Word focuses on the initial tremors of freedom for ordinary people amid wartime turmoil and the process of emancipation. This is original work of the highest order.”—Kathleen Diffley, editor of To Live and Die: Collected Stories of the Civil War, 1861–1876

“Hager brilliantly imagines scenes of writing among freed people in the decades immediately following emancipation, showing how former slaves turned to writing as a way of taking control of their world. Word by Word is a major and revelatory act of historical recovery done with imaginative sympathy and critical verve.”—Robert S. Levine, author of Dislocating Race and Nation: Episodes in Nineteenth-Century American Literary Nationalism

“A penetrating and revealing portrait of people in the process of defining freedom, Word by Word is a stirring, important work that reshapes our understanding of slavery and emancipation.”—Louis P. Masur, author of Lincoln’s Hundred Days: The Emancipation Proclamation and the War for the Union