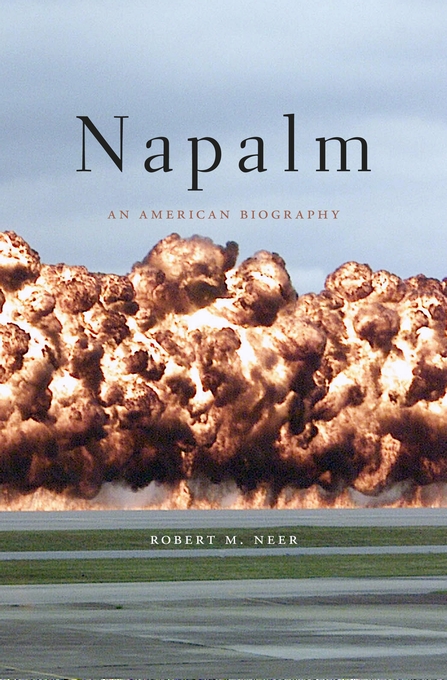 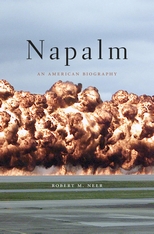 “Napalm: An American Biography is…meticulously researched and vitally important… Napalm came to be employed the world over. Neer’s chronicle of its use by American allies and client regimes against opponents in the Philippines, Greece, Cuba, Egypt, Peru, Bolivia, Cyprus, Tunisia, Algeria, Kenya and Angola, among other nations, is a revelation and one of the most enlightening portions of Napalm… Napalm: An American Biography is a fascinating and long-overdue study of one of modern warfare’s signature weapons. Neer has provided a valuable book that fills in historical gaps and sheds much-needed light on a history that many would rather forget.”—Nick Turse, The San Francisco Chronicle

“Neer systematically follows the story of napalm that originally empowered an often outnumbered American military to fight far abroad against the Japanese, and later, North Koreans, Chinese and Vietnamese—only to become a byword for the pathologies of the military–industrial complex of the United States… Neer is often highly critical of the American use of napalm; yet his narrative of its origins, production and use over the past seven decades is not a jeremiad, but learned, fair and historically accurate… Neer is especially insightful in showing how Vietnam was a turning point in public perceptions about napalm… For all its infernal destructiveness and the terror it instills in hapless ground troops, this savage weapon has probably not changed the thinking behind age-old warfare all that much.”—Victor Davis Hanson, The Times Literary Supplement

“In the era of drone strikes, Napalm is a timely look at what it means to (literally) rain death from above. Developed at Harvard during World War II, napalm was explicitly designed to destroy civilian targets: It was even tested on mock-ups of German and Japanese houses. The horrific firebombing of Japan and the use of napalm in Vietnam figure prominently, but the book also details lesser-known uses of the weapon in Korea and Iraq (where the U.S. military insisted its ‘firebombs’ were different than napalm). An excellent and disturbing history of a weapon that’s synonymous with the horror of modern warfare.”—Dave Gilson, Mother Jones

“This book should really appeal to everyone. There is no bias here, no leftist or conservative agenda. This is simply an exhaustive history of napalm, from its beginnings as kind of a scientific puzzle for technocrats to one of the most widely despised symbols of war. This book is historical enough for history buffs, yet laden with enough military and chemistry jargon to make the viewers of the History Channel and Discovery Channel, respectively, go dry-mouthed with anticipation. Neer has a penchant for making even the most technical and obtuse topic insanely readable.”—Shyam K. Sriram, PopMatters

“Napalm was not developed as anything other than a weapon to burn people. Neer provides damning proof of this… Napalm killed hundreds of thousands and helped the Allies to win the Second World War. But it helped to lose America the war in Vietnam. Photographs of napalm victims turned opposition to the war into a national movement.”—Sam Kiley, The Times

“Robert M. Neer’s clear-eyed and harrowing new account surveys this infamous technology from both perspectives. This is history, in a literal sense, from above and below. Using napalm as a symbol for American global influence acutely demonstrates the political trajectory of a superpower, from impetuous upstart to tortured giant to—finally—chastened hegemon.”—Thai Jones, Dissent

“Neer has created the first comprehensive history of napalm, meticulously charting the early years when the weapon—developed by scientists at a secret war research laboratory at Harvard—was treated as a glorious new instrument of war at the tail-end of the second world war, to its controversial image in the aftermath of Vietnam and the protest movements that grew around it… Neer doesn’t hold back his punches in describing the nightmarish scenes following napalm strikes, quoting heavily from accounts of those caught underneath and journalists who arrived on the scenes soon after… There is no question that Neer has done a masterful job of writing a compelling history of one of the major villains of the 20th century.”—Kit Gillet, The South China Morning Post

“Neer recounts in rich detail the extraordinary evolution of napalm from hero in the gilded age of post-WWII American power to pariah in the aftermath of Vietnam… Neer ultimately moves beyond the protests to examine how antiwar grassroots activism, art, journalism and politics during and immediately after the Vietnam War radically reshaped cultural attitudes about napalm and the United States.”—Warren Wilkins, Vietnam Magazine

“[This] is the first comprehensive history of napalm, and tells the story of how a weapon deemed so useful in World War II and Korea hit a turning point in Vietnam. During that time it became the target of antiwar protestors, who mounted a nationwide campaign to stop Dow Chemical Co. from manufacturing it.”—Gal Beckerman, The Boston Globe

“Provides us with a meticulous account of the development of napalm as a chemical weapon that would eventually be responsible for the deaths of millions of innocent civilians around the world. At a time of increasing paranoia about weapons of mass destruction in general and chemical weapons in particular, Napalm is a timely contemplation of the political, economic and sociological factors that combined to produce such a seemingly simple yet diabolical munition… [A] chilling account of this indiscriminate weapon of mass destruction.”—Tom Clonan, The Irish Times

“Neer help[s] us understand why the events of 1945 linger on as exemplars of both the pinnacle of military engineering and the essence of what war should not be.”—Jan Mieszkowski, Los Angeles Review of Books

“In 1942, in a secret lab at Harvard University in Massachusetts, chemist Louis Fieser and his team created napalm—an incendiary gel that sticks to skin and can burn down to the bone. Robert Neer’s harrowing story veers from Fieser’s tests on ‘kamikaze’ bats fitted with napalm bombs to the 1944–45 incendiary bombing of Japan that killed 330,000 people.”—Nature

“[Napalm’s] history is a parable of the vicissitudes of modern American power… Neer shows that it played a role as important as the atomic bomb in hastening Japanese surrender in the Second World War.”—New Statesman

“As described by Neer in this hideously readable account, napalm—developed in 1942—was one of the first fruits of the academic–military–industrial complex which has done so much to shape America—and the world—in the decades since. Its history seems quintessentially American, too, in the combination of ingenuity and ingenuousness which went into its development and deployment; the moral blindness to what all the world except the U.S. can see.”—Michael Kerrigan, The Scotsman

“[A] gripping, meticulously documented study of a devilish weapon… Besides giving us an accurate description of the political and military landscape of the time—the relentless bombing of North Vietnam, the antiwar protests, the endless arguments over the war’s morality, the outcries over napalm-producing Dow Chemical’s recruiting on campuses—Neer vividly makes clear how napalm earned its satanic reputation as an indiscriminate incinerator of children… [A] thought-provoking and heart-rending book.”—Chris Patsilelis, The Tampa Bay Times

“Neer’s biography covers the post-Vietnam years of napalm, its appearance in song and story (the scabrous military call-and-response Napalm Sticks to Kids, the film Apocalypse Now), U.S. resistance to international efforts to ban its use (overcome finally in 2008, although with reservations) and, albeit with a name change, its ongoing use in the war in Iraq… [A] disturbing book.”—Marilyn Young, Times Higher Education [04/18/13]

“[Neer has] a brilliant eye for the horrible detail… Neer constructs this early narrative with exceptional skill and intelligence, vividly tracing the path that connects gleeful scientists on Cambridge soccer fields to streets and basements choked with human ash in Europe and Asia.”—Chris Bray, Bookforum

“Readers expecting a polemic may be pleasantly surprised at this lucid account of the technical, political and ethical features of a notorious symbol of American inhumanity in war… Napalm receives an overdue but thoroughly satisfying history.”—Kirkus Reviews

“The author details napalm’s creation by Louis Fieser (1899–1977) at Harvard and its pre-Vietnam use, wreaking mayhem in Japan during World War II and later in the Korean War. Neer’s coverage of napalm’s toll on thousands of Vietnamese citizens and the growing American awareness of these atrocities, which sparked the antiwar movement against Dow Chemical, napalm’s largest producer, is gripping… [A] concise, often fascinating, story of this weapon’s place in warfare and American popular culture.”—Karl Helicher, Library Journal

“In this engrossing study, historian Neer recounts the prodigious youth and reviled old age of an iconic weapon… Neer’s thoroughly researched, well-written account mixes lucid discussions of chemical engineering and the law of war with gut-wrenching depictions of napalm’s nightmarish effects. More than that, it furnishes a thought-provoking lesson on evolving attitudes toward military means and ends.”—Publishers Weekly

“No one else has told so deeply and compellingly the story of how ‘Napalm was born a hero but lives a pariah’—a terrifying weapon associated with America’s Vietnam War whose history went back much further, as did the dishonest efforts of leaders to cope with its reputation.”—Michael S. Sherry, author of In the Shadow of War: The United States since the 1930s

“Napalm is a revelation. In a story that takes us from Harvard Stadium to Vietnam, Robert M. Neer retells the past 70 years of American history through a single extraordinary and terrible invention. Highly recommended for anyone interested in the American way of war and its humanitarian dilemmas.”—John Fabian Witt, author of Lincoln’s Code: The Laws of War in American History