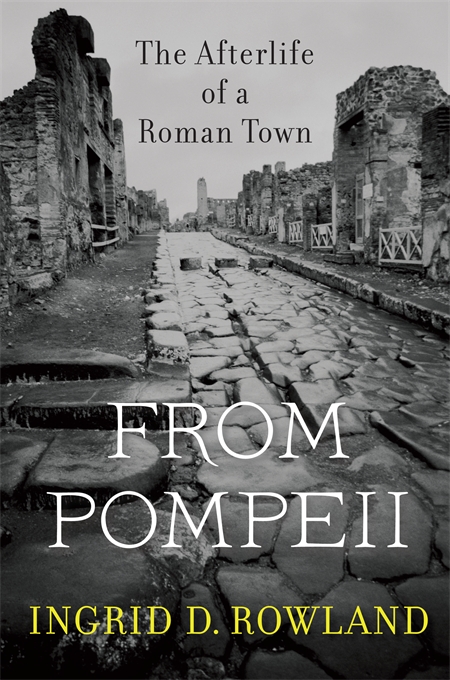 The Afterlife of a Roman Town

“Its historical breadth and richness notwithstanding, From Pompeii is a surprisingly intimate book. Rowland begins with her first encounter with Herculaneum as an 8-year-old with a Brownie Starmite camera… From Pompeii is thus a personal, even idiosyncratic, introduction to Pompeii in the mode of, say, the novelist E. M. Forster’s Alexandria: A History and a Guide… If you have any interest in Pompeii, or in entertaining scholarship, or in Italian culture, you’ll want to set aside a few evenings for this deeply engaging work of popular history.”—Michael Dirda, The Washington Post

“[Rowland’s] book is a personal, indeed highly selective, account of what many researchers, cultivated visitors, archaeologists and even urban reformers have made of the site and the modern town of Pompeii: It reads, all told, like a collection of entertaining essays. She handles her theme with an ease and authority that should please others who are fond of Campania, the Neapolitan region, an area of great beauty and equally great social and environmental problem… Rowland covers a wide range of topics, including the creation of the modern town of Pompeii, the musings of tourists like Dickens and Mark Twain, and diverse aspects of Neapolitan folklore.”—Dan Hofstadter, The Wall Street Journal

“Elegant, witty and beautifully produced… It is less a guide than an overtly aesthetic appreciation of the site and its environs, poetic in its sense of connections over time… It is more the gap between individual drama and universal catastrophe, both inside Pompeii and looking on from outside, that Rowland’s account so powerfully conjures up.”—Emily Gowers, The Guardian

“[A] lively book… For Pompeii is not really frozen in time. The achievement of Rowland’s book is precisely to show it at the heart of a turbulent, ever-changing region, where the landscape and people are forever caught up in transformation and drama—whether geological, political, technological or cultural. She beautifully evokes the connections between the local, the international, the spiritual and the seismic… For Rowland, Pompeii is the fount from which innumerable rivulets of history flow, and her fluent and engaging writing follows them where it will… This is a vivid and stimulating account of the history of a corner of the earth where there seems too much colorful humanity ever to be adequately captured in a single book. Rowland’s brimming pages show there are plenty more treasures to be excavated from the fertile volcanic soil of its history.”—Rebecca Langlands, Times Higher Education

“There’s probably no one more qualified to have a go at this subject than Rowland… She possesses unsurpassed knowledge of whatever she takes up, and this work is no exception… It will delight any reader who likes the serious laced with the macabre and bizarre, the ancient with the modern… We never tire of her deeply knowledgeable entertainment… [A] genial, learned travelogue… It’s one of the pleasures of Rowland’s tour that we get to meet with Pompeii’s visitors over the centuries, as varied a cast of characters as might be dreamed up… While this is in no sense a guidebook to Pompeii and Herculaneum, anyone planning to visit Italy’s southwest coast will gain from taking Rowland’s fast-paced historical tour beforehand… [A] splendid book.”—James M. Banner, Jr., The Weekly Standard

“This is a book difficult, even impossible, to summarize… Rowland’s enthusiasm for her subject and her knowledge of history are such that many will find interest and pleasure in dipping into it, pulling out a plum here or there.”—Allan Massie, Literary Review

“Visitors to Pompeii have long marveled at the town’s perfectly preserved scenes of Roman life, but interpretations of those scenes have varied widely over the years. Rowland writes about a selection of those visitors, some famous—like Renoir, whose painting style was influenced by the town’s erotic frescoes—others less well known—like a priest named Father Kircher, who risked the wrath of the Inquisition when he suggested that the eruption of Vesuvius was ‘in response to gigantic cycles within the earth itself rather than God’s pique at individual sinners.’ Each story speaks to the way in which Pompeii reveals the hopes and the desires of the individuals and of societies.”—Andrea DenHoed, The New Yorker

“[Told] in rich and fascinating detail… When Rowland tells us that a visit to Pompeii can change a person’s life, she is speaking from personal experience.”—Tom Holland, The Spectator

“From Pompeii is immensely lively and thought-provoking… The book is crammed with telling details and entertaining snippets.”—Chloe Chard, The Sunday Telegraph

“The book is an entertaining canter through two millennia of history, deeply learned without succumbing to stuffiness or superiority… Rowland is a lively writer and her tale of Pompeii’s rediscovery and excavation is engaging. She skillfully brings to light details of the world unearthed at Pompeii—the various styles of painting identified by art historians, the social purpose of the god Priapus—and splices these into her narrative of discovery. In the process she never loses sight of the relationship between this recovery of antiquity’s physical remains and the 18th century’s vibrant neo-classicism. The former clearly nourished the latter, but the story turns out to be more complicated than first thought.”—Luke Slattery, The Sydney Morning Herald

“[An] engaging look at the allure of an ancient city.”—Vanessa Bush, Booklist

“The book is an enjoyable read that encompasses an exciting range of topics in political and social history… Recommended for general readers who want to know more about a place that continues to haunt the imagination of nearly everyone who visits it.”—Linda Frederiksen, Library Journal

“[Rowland] constructs an overview of Pompeii’s history by collecting the opinions and work of famous figures: artists, writers, musicians, actors, and royalty, including Renoir, Mozart, Ingrid Bergman, and Crown Prince Hirohito of Japan. All of the individuals included experienced Pompeii and its environs firsthand—though some, like Mark Twain and Charles Dickens, did not always see them in a positive light. Rowland’s work, replete with lyrical verse and beautiful descriptions of Southern Italy, highlights potential problems with preservation, and…it wistfully captures the atmosphere of a place both beautiful and dangerous.”—Publishers Weekly

“Ingrid D. Rowland’s richly learned From Pompeii is a wonderfully well-written, funny, fascinating, and oddly poignant tour through the many afterlives of the ancient city. This is a brilliant book about the pleasures and perils of archaeology, historical preservation, and cultural tourism, stumbling over one another in a quixotic search for the traces of the dead.”—Stephen Greenblatt, author of The Swerve: How the World Became Modern

“Original, highly illuminating, and fun—brimming with ideas and observations—and many surprises for those familiar with Pompeii as well as for new visitors to the Bay of Naples. This is classic Rowland!”—Kenneth Lapatin, J. Paul Getty Museum