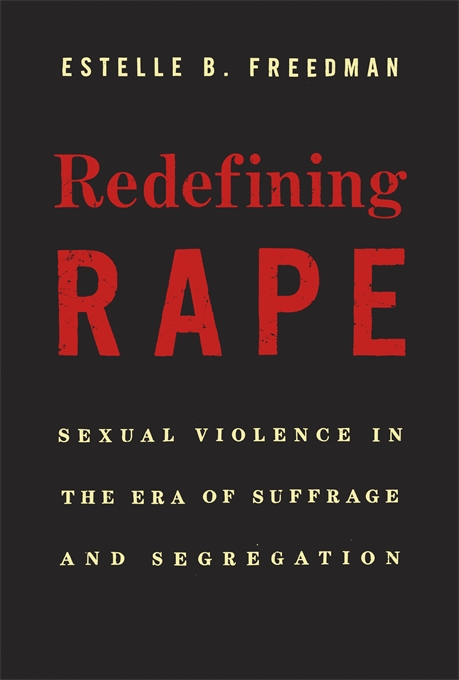 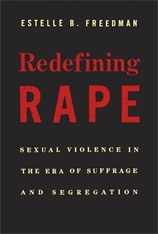 Sexual Violence in the Era of Suffrage and Segregation

“Freedman shows how, since the country’s founding, ideas about sexual violence have traditionally been informed—and enforced—by and for a ruling class of white men. She also outlines the history of anti‐rape movements that challenged white supremacy and male supremacy. The presentation of these disparate movements, which were often at odds with one another despite having seemingly similar goals, is among the most fascinating aspects of Freedman’s narrative… Throughout history there has been no cohesive anti‐rape movement, and Redefining Rape makes the reasons for that clear. By cataloguing the many disparate critiques of the popular definitions of rape over time, Freedman has placed a largely invisible history of anti‐rape reform in the broader context of ongoing struggles for social equality in the United States… For anyone interested in undertaking intersectional, anti‐racist feminist action against sexual violence, Redefining Rape has a lot to offer. Freedman does a great service in providing a historical account of where we came from, how we got here, and lessons for how to do it better in the future.”—Annie Shields, The Los Angeles Review of Books

“Freedman’s narrative is not simply relevant; it provides a sophisticated understanding of why rape is something we have been debating for centuries… This book is an ambitious and highly successful project. In clear prose filled with riveting anecdotes and powerful stories, Freedman recounts the story of rape, its wounds, its discontents and our as-yet-incomplete march to its end.”—Imani Perry, The San Francisco Chronicle

“[Freedman] does more than merely chronicle the distressing history of racism in the U.S. between the 1870s and the 1930s. She is engaged in a meticulous analysis of the responses of various civil rights movements to pervasive sexual violence against women, girls and young boys… Even when the rape of black women was acknowledged, it was in the context of the harm done to black men’s pride: lynching (of men) rather than rape (of women) became the symbol of African American subjugation. By focusing on protest against oppression, Freedman gives readers an intellectually complex exposition of racial politics in America.”—Joanna Bourke, Times Higher Education

“This stunning U.S. history demonstrates that power and privilege fundamentally shape the meanings of rape—its legal definitions, cultural representations, and human impact. Focusing especially on 1850–1950, Freedman argues that rape and citizenship are inextricably bound. Contests over who may—and may not—claim protection from sexual violence and accusations of rape illustrate this. Connections to broader histories of racial, class, and gender injustice drew attention to activists’ work, and Freedman deserves praise for critically examining their different attitudes and aspirations. She also astutely acknowledges regional differences in legal constructions, representations, and experiences of rape and sexual violence. Insightful critiques of sodomy laws, male youth, and men of color distinguish this book… This important, timely work should draw a diverse readership.”—S. Burch, Choice

“Freedman’s compelling account of the journey to define rape in America reveals that whoever controls the meaning of rape and of sexual violence controls our future and freedom. It is a crucial book.”—Eve Ensler, author of The Vagina Monologues and In the Body of the World

“Redefining Rape is a brilliant, vitally important, and richly textured history of the shifting definitions of rape in America, and of the relentless challenges that black and white women waged to protect their humanity and to own their bodies. Freedman perceptively traces the self-defense mechanisms women developed in order to sustain a culture of activism and resistance.”—Darlene Clark Hine, Board of Trustees Professor of African American Studies and Professor of History, Northwestern University

“Freedman eloquently demonstrates that changing understandings of who is likely to rape, and who is likely to be the victim, have been at the core of the troubled histories of racial and gender injustice. Read this remarkably important book to understand the enduring sexual politics of our own time.”—Linda K. Kerber, author of No Constitutional Right to Be Ladies: Women and the Obligations of Citizenship

“This is an unsparing and revelatory study. As she tracks evolving views of what constituted rape and who was to blame, Freedman illuminates American inequalities—of class, age, gender, and especially race—from wholly unexpected angles. A must for anyone concerned with equity in the American polity.”—Nancy F. Cott, author of Public Vows: A History of Marriage and the Nation