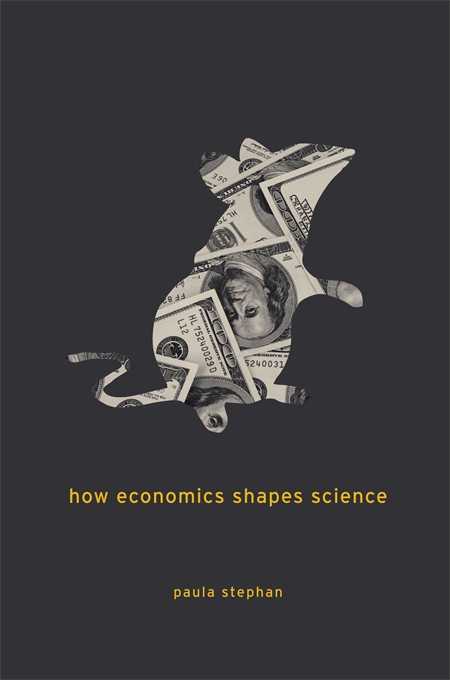 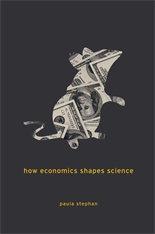 “How Economics Shapes Science should be required reading for all scientists and students of science, who are increasingly called upon to adopt the language and logic of economics and engage in policy discussions. Paula Stephan (an economist at Georgia State University) makes her case in simple, easy-to-follow language, using timely examples… The book starts by summarizing the case that private industry alone will not invest in the socially optimal level of research, which will ultimately decrease the rate of innovation and lower economic growth. The logic is worth repeating at a time when there are calls for limiting government support for research and researchers face pressures to engage in lower-risk projects. Stephan convincingly argues that monetary incentives increasingly determine the behavior of researchers at the expense of scientists’ desire to participate in the joy of solving problems, receive recognition, and obtain a good reputation.”—Maryann Feldman, Science

“[An] original and engaging book… Informed, authoritative and thoughtful, Stephan’s book will be an invaluable resource for scientists, policymakers and all those working to improve the ‘science of science and innovation policy’ in the U.S., Europe and further afield.”—James Wilsdon, Times Higher Education

“A big biomedical lab spends 18 cents a day to keep one lab mouse, amounting to hundreds of thousands of dollars for animals each year. Economist Paula Stephan takes an exhaustive look at how publicly funded science pays such bills, and how this affects research, researchers and the economy. She argues that expanding universities and stagnant budgets have made funders and scientists more risk-averse, and stunted the development of young investigators.”—Nature

“[A] rich, data-driven, and nuanced discussion of science and economics… [A] excellent book. Stephan addresses how R&D spending is often driven by politics—either geo-politics (the Cold War) or personal politics (biomedical research), and how jobs in the sciences respond accordingly (and how competitive options for smart people have affected job uptake). She also talks about how difficult science and research spending is to measure from an economic efficiency perspective—essentially, because payback on investments can be quite indirect and take decades, choosing between investment options is fraught with the chance for mistakes. And the emerging trend showing that higher-impact science comes from funding entities that evaluate people instead of projects and provides longer-term funding is also covered… This book will have a special place on my shelf, as one of a handful of books that demand to be revisited, referenced, and re-read because there is so much clear and important information to be had, and some definite criticisms of the current system policy-makers need to consider.”—Kent Anderson, Scholarly Kitchen

“Illuminating and accessible… Using the ‘tool bag’ economics provides for ‘analyzing the relationships between incentives and costs,’ [Stephan] penetrates the financial structure of university-based science, explaining the motivation and behavior of everyone from august university presidents and professors to powerless and impecunious graduate students and postdocs. It’s a remarkably revealing approach… The short space at my disposal allows me to present just a hint of the penetrating discoveries waiting in this book… [A] rigorous and clear-eyed examination of the money trail. She conveys her findings in clear, comprehensible prose. If you want to understand what is really happening in American academic science today, here’s my advice: Read this enlightening book.”—Beryl Lieff Benderly, Science Careers

“This volume provides a useful summary of how economics shapes science that is accessible to students and researchers in a variety of disciplines and to policy makers.”—R. B. Emmett, Choice

“Paula Stephan is the undisputed authority on the economics of science and her book is a delight. Laced with dozens of revealing anecdotes about everything from transgenic mice to the competition for high h-indexes and the Nobel Prize, How Economics Shapes Science reveals the economic logic behind the workings of modern science and makes a compelling case for using incentives to rationalize our use of scarce resources.”—Charles Clotfelter, Z. Smith Reynolds Professor of Public Policy and Professor of Economics and Law, Duke University

“Paula Stephan is one of the world’s leading scholars of the economics of science. Her comprehensive analysis—as readable as it is timely—is a must read for anyone worrying about the future of science policy or the economics of universities.”—Ronald G. Ehrenberg, Irving M. Ives Professor of Industrial and Labor Relations and Economics, Cornell University

“This is a marvelous book—lucid, cogent, and lively, full of fascinating anecdotes and news about what university science costs, who pays for it, and who benefits. Paula Stephan saw science as an economic enterprise long before other economists did, and she’s written what will be the definitive book for years to come.”—Richard Freeman, Herbert Ascherman Chair in Economics, Harvard University

“This fascinating book makes senior scientists like me keenly aware of the travails that await our students and post-docs as they pursue the many years of scientific training that lead to a very uncertain career. As Paula Stephan shows, from the point of view of income and stability, our students might be better off getting MBAs. All senior scientists should read this book. It gives a sobering dose of reality to our love of science.”—Kathleen Giacomini, Professor of Bioengineering and Therapeutic Sciences, University of California, San Francisco

“How do economic considerations shape what scientists do? How do scientific developments affect economic progress? In a world facing challenges like global warming and threats of economic stagnation, these are critical questions. Paula Stephan’s treatment is masterful—and readable outside the ranks of economists, too.”—Richard R. Nelson, George Blumenthal Professor Emeritus of International and Public Affairs, Business, and Law, Columbia University

“Scientific research and professional training are now inextricably linked. At the same time the perceived costs and benefits of science have skyrocketed, with governments and universities setting economic incentives in the race for productivity and prestige. Stephan’s groundbreaking economic analysis shows the complex results of these policies.”—Mara Prentiss, Mallinckrodt Professor of Physics, Harvard University

“We in Europe often invoke the U.S. science system as the frontier for us, but most of us don’t know in detail how it actually operates. With its wealth of facts and stories, and its rich multidisciplinary perspective, Paula Stephan’s book can teach us. It will help scientists understand their environment and help policy makers see what levers they have (or do not have) to direct science. No one other than Paula Stephan could write with such insight and depth.”—Reinhilde Veugelers, Professor of Managerial Economics, Strategy and Innovation, Katholieke Universiteit Leuven