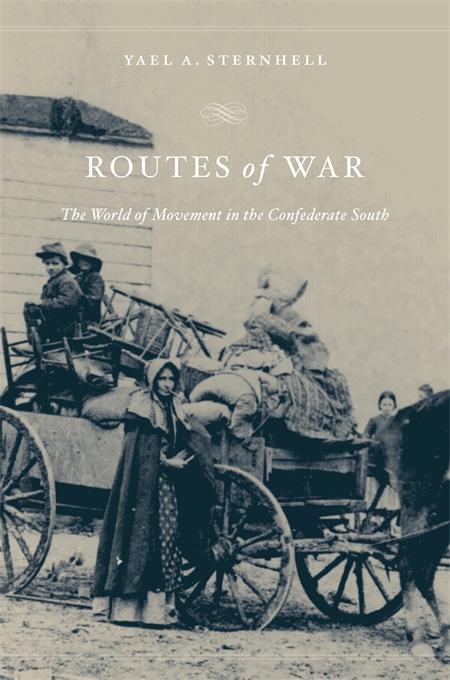 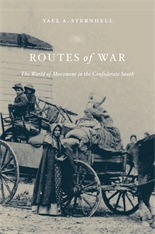 The World of Movement in the Confederate South

“The author’s incisive analysis leads to a number of fresh and fascinating ways to understand the history of the Civil War and its discontents… Routes of War is a grand achievement because it raises…important questions that have not been examined in the many thousands of books and articles published on the Civil War. Sternhell deserves accolades not only for this, but also for demonstrating quite efficaciously how motion constitutes a fundamental aspect of war in general. The most brilliant aspect of the book is her willingness to analyze motion both as a physical act and as a symbol of meaning.”—Jim Downs, American Historical Review

“It’s not easy to say something fresh about the American Civil War; truly pioneering studies are few and far between. But Sternhell provides a decidedly new vantage point from which to view the war and to understand what it meant to Southerners—soldiers, slaves, and civilians.”—James L. Roark, Civil War Book Review

“Sternhell writes beautifully and convincingly, arguing that the road can be a place of liberty, of opportunity—but also of failure and fear.”—Megan Kate Nelson, Civil War Monitor

“[Sternhell] brings fresh insight to the American Civil War… Sternhell’s book is thought provoking in that it shifts the traditional Civil War narrative by blurring the relation between the experience of civilian and soldier… Sternhell’s book is fine scholarship that pushes the boundaries of Civil War studies.”—Robert Gudmestad, Journal of Southern History

“Sternhell has written a pioneering study of the creation and downfall of the Confederacy. This original, imaginative, and persuasive book—a must have for any U.S. history collection—will transform understanding of the Civil War. The author posits that incessant motion between battlefields, plantations, and other traditional sites of Civil War history shaped the Confederate South and shook the region to its foundations, ultimately transforming it forever.”—E. M. Thomas, Choice

“Imaginative, innovative, dug from new kinds of research, informed by an international perspective, and written with verve and persuasion, this book delivers a new and lasting analytical narrative of the nature and meaning of emancipation in America and how the Civil War reshaped our moral and spatial imagination.”—David W. Blight, author of American Oracle: The Civil War in the Civil Rights Era

“This book truly transforms the way we think about the Civil War. In eloquent prose and with exceptional skill, Sternhell makes clear why the wartime movement of the South’s people—civilians, slaves, armies—literally shook the South to its foundations.”—W. Fitzhugh Brundage, author of The Southern Past

“Exploring the concepts of space and movement, Sternhell brings disparate elements of the population into play and reveals patterns even veteran students of the conflict will find fascinating and instructive.”—Gary W. Gallagher, author of The Union War

“Yael Sternhell has written the most original and innovative study of the creation and ultimate dissolution of Confederate nationalism that has yet appeared.”—James M. McPherson, author of Battle Cry of Freedom

“The visual language of people on the move is the leitmotif of this splendid book, a major contribution to the historical literature not only of the Civil War but of those catastrophes which followed it.”—Jay Winter, Yale University