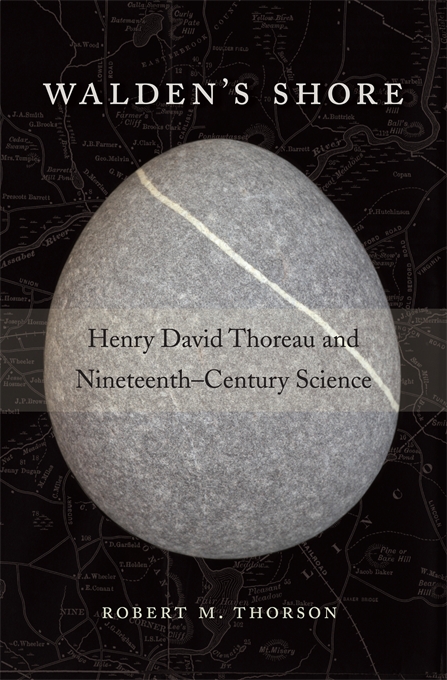 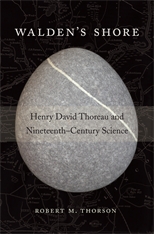 “In his 1854 masterpiece Walden, the U.S. writer and naturalist Henry David Thoreau invites us to ‘wedge our feet downward…till we come to a hard bottom and rocks in place, which we can call reality.’ Geologist Robert Thorson obliges, focusing on Thoreau as a flinty amateur geologist to reinject science into his literary legacy. Thoreau, Thorson persuasively argues, was as grounded in rock as he was in the elemental understanding of the cosmos sought by the Transcendentalist movement.”—Nature

“An insightful book that reads Walden; Or, Life in the Woods not as a literary or philosophical text but as a series of geological experiments.”—Daegan Miller, The Los Angeles Review of Books

“Thorson’s fresh approach to Walden looks beyond the work as literary artifact and philosophical treatise, showing it from the perspective of a geologic scientist. What emerges is a fascinating study of Thoreau’s close attention to geology and an exploration of his interest in theories of geological evolution.”—Dianne Timblin, American Scientist

“Walden’s Shore is a serious, substantial, and impressively erudite entry into the field—a model for how interdisciplinary approaches can bring original and revelatory perspectives to bear on even the most well-worn texts… Thorson’s careful reconstruction of Thoreau’s likely knowledge of landscape formation and glacial theory is especially impressive, and constitutes a comprehensive account of Thoreau’s relation to what was apparently a major scientific controversy of the mid-19th century.”—James Williams, PopMatters

“What emerges from Walden’s Shore is a portrait of Thoreau in transition, pulled in one direction by the force of his poetic genius and keen eye for humanity’s foibles, on the one hand, and, on the other, a thinker whose insights make him more of a ‘curiosity-driven scientist’… Whereas many of us are used to literary critics sticking their toes into scientific waters—sometimes to their discomfiture—it is rare to find a scientist who knows and appreciates a literary masterpiece the way Thorson does and can write about it with aplomb. Thorson’s affection for the book and its author is clear.”—William Major, Environmental History

“Fascinating… Thorson presents the strongest version yet of the argument that, by the time he reached his early thirties, Thoreau was a scientist. Thorson provides a vivid core sample of Thoreau’s middle career, a dense, compelling vision of the geodynamics of Walden Pond, and an unexpectedly personal picture of Thoreau’s relation to nineteenth-century science… The great strength of Walden’s Shore, then, lies in its absorbing analytical presentation, through geo-scientific eyes, of topographies familiar to Thoreauvians—of Walden Pond, the Journal, and Walden itself—all lucidly explained for a nontechnical audience. Those of us who have become devoted to the place, the book, and its author owe Robert Thorson a debt of gratitude along with a heap of royalties.”—William Rossi, Thoreau Society Bulletin

“Thorson says that literary types haven’t had the scientific chops to recognize, among other things, Thoreau’s ‘genius for river channel hydraulics’ and how close he came to discovering glacial theory (then unformed, now proved) to explain his terrain of erratic boulders and kettle ponds. Thorson says that Thoreau changed from ‘science light’ to ‘science heavy’ around 1851, and his writing shed much of the ecstatic divine metaphors for a style closer to field notes.”—Katherine Whittemore, The Boston Globe

“Utterly fascinating… In studying Thoreau’s own debts to the science-writers of his time, Thorson opens up Walden from its sometimes insular grandeur and grounds (so to speak) its mythopoetics in the physical properties of the place Thoreau made famous.”—Steve Donoghue, Open Letters Monthly

“Most people know Thoreau as an environmental essayist, a 19th-century naturalist, and a commentator and an essayist on social and political matters. Through a detailed reading of Thoreau’s Journal and Walden, Thorson shows that Thoreau was a competent scientist with expertise in limnology, geology, hydrology, and ecology. He also had a fundamental understanding of the effects of glaciers on landscapes.”—L. T. Spencer, Choice

“[Thorson] adds depth to the iconic image of Thoreau, revered for his contributions to the American literary renaissance and his role as a social reformer. Thorson uses Thoreau’s journals as a source for his contention that he had a keen interest in geology and the emerging theories of geological evolution reflected in Charles Darwin’s Journal of Researches (1851), which Thoreau read with great interest.”—Kirkus Reviews

“Walden’s Shore has no predecessor in the field of Thoreau studies. It is a welcome addition and a needed reassessment of an iconic figure.”—Jeffrey S. Cramer, editor of The Portable Thoreau

“The work of an extraordinary mind. Thorson seeks to ground what is arguably the greatest piece of non-fiction produced in America, and one of the world’s classics, not in the field of language where it has long been situated but rather in the material universe with which Thoreau extensively interacted and on which he long meditated. He stunningly succeeds in this effort.”—Wayne Franklin, University of Connecticut