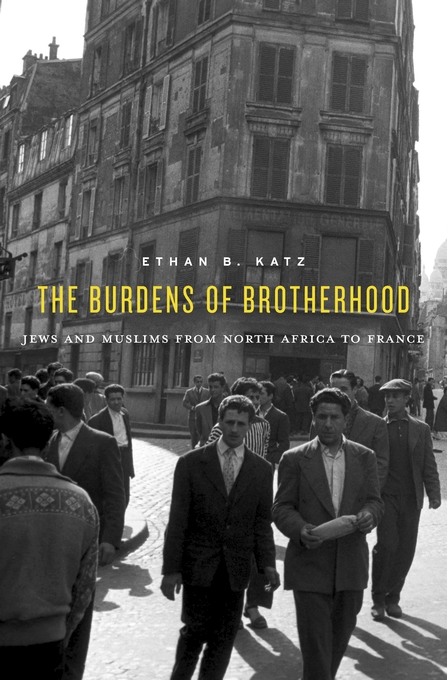 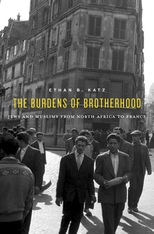 The Burdens of Brotherhood

Jews and Muslims from North Africa to France

“Thought-provoking… Katz has uncovered fascinating stories of interactions between Muslims and Jews in France and French colonial North Africa over the past 100 years that defy our expectations… His insights are absolutely relevant for understanding such recent trends as rising anti-Semitism among French Muslims, rising Islamophobia among French Jews and, to a lesser degree, rising rates of aliyah from France… If it’s the current crisis that is of interest, this book is more than worth your time… The Burdens of Brotherhood is an important book because it gives us new ways of thinking about Muslims and Jews in France, as well as for what it tells us about the French policies that, too often over the past century, stigmatized, excluded and triangulated in the name of secularism, democracy and social peace.”—Lisa M. Leff, Haaretz

“Katz’s book offers not only a powerful counter-narrative to the story we now tell ourselves about Jewish–Muslim relations in France, but also a reason to hope that other narratives might still unfold.”—Robert Zaretsky, Forward

“A compelling analysis on the complicated—and often fraught—relationship of Jews and Muslims vis-à-vis France from the late 19th century to the present day… Katz’s narrative argues that Jews and Muslims may have spent a considerable portion of French history in constant opposition to each other. However, he also points out that they’ve fought side-by-side as soldiers in war, formed close bonding friendships, lived peacefully in the same neighborhoods, and even become lovers at times too.”—J. P. O’Malley, The Times of Israel

“Shed[s] light on the shared history of Muslims and Jews in France. [It] give[s] more complex accounts of their interaction than the mutual hostility portrayed in the news would suggest… [Katz’s] frequent use of pictures and maps enables the reader to visualize the everyday life of Muslims and Jews in France.”—Laura Wollenweber, Global Urban History

“[Katz] draws gracefully on colorful stories far from the headlines and textbooks to capture the real people who lived history… Katz’s interpretation is engaging and eye opening. He unearths history that has been forgotten or ignored, or is simply unknown, especially to a non-French audience.”—Melanie Takefman, The Jerusalem Post

“Thanks to its broad view, rich and diverse sources, and the issues it tackles in depth, The Burdens of Brotherhood is an important and highly readable study.”—Rachel Simon, Jewish Book Council (website)

“[Katz] elucidates on subjects as sensitive as Algerian Jewish involvement in the Organisation d’Armée Secrète (OAS) and likewise sheds light on some retrospectively painful instances of North African Muslim-Nazi collaborationism—little known occurrences that make up a part of the two scars of Jewish and Muslim history that run deepest in France. He does this rigorously, giving deep context, and showing intellectual honesty, his work in no regard resorts to assumptions about what behavior a faith or a religious culture might dictate.”—Samuel Everett, Lectures

“Ambitious… Katz illuminates a world of shared spaces and experiences that defy the rigid divisions often ascribed to Muslims and Jews… The rich and varied tableau of Jewish and Muslim coexistence that Katz presents is not only a remarkable contribution to the study of France and its empire, but also to the shared history of these two communities under French governance.”—Rachel Schley, Marginalia Review of Books

“Katz has written a compelling, important, and timely history of Jewish/Muslim relations in France since 1914 that investigates the ways and venues in which Muslims and Jews interacted in metropolitan France… This insightful, well-researched, and elegantly written book is mandatory reading for scholars of the subject and for those approaching it for the first time.”—J. Haus, Choice

“This is a thoroughly researched and thoughtfully composed exploration of a challenging subject: the relations between French Muslims and French Jews across the turbulent and painful history of France in the twentieth century. Katz’s sensitive analysis is made possible by his deep engagement with new and provocative archival material and his broad familiarity with a wide range of published sources. His book exemplifies the best aspects of recent work on Jews and Muslims in Europe.”—Joshua Cole, University of Michigan

“This courageous book addresses the very contentious debate on Muslim–Jewish relations that has divided both scholars and the wider public. Katz powerfully and convincingly challenges conventional understandings of the issue by proposing that there were multiple ways in which Jews and Muslims have interacted in France through the course of the twentieth century.”—Daniel Schroeter, University of Minnesota