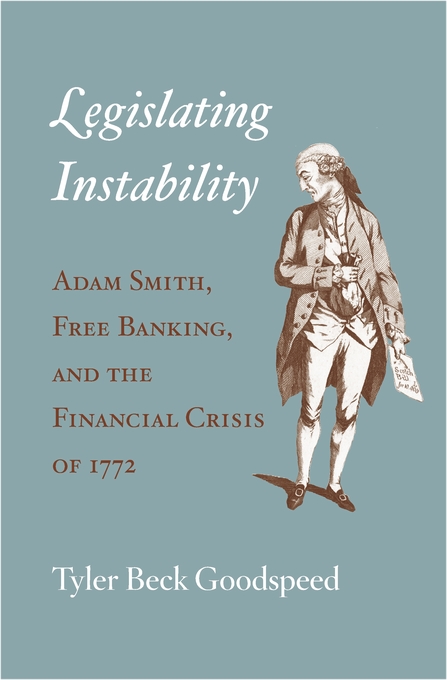 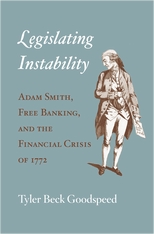 Adam Smith, Free Banking, and the Financial Crisis of 1772

From 1716 to 1845, Scotland’s banks were among the most dynamic and resilient in Europe, effectively absorbing a series of adverse economic shocks that rocked financial markets in London and on the continent. Legislating Instability explains the seeming paradox that the Scottish banking system achieved this success without the government controls usually considered necessary for economic stability.

Eighteenth-century Scottish banks operated in a regulatory vacuum: no central bank to act as lender of last resort, no monopoly on issuing currency, no legal requirements for maintaining capital reserves, and no formal limits on bank size. These conditions produced a remarkably robust banking system, one that was intensely competitive and served as a prime engine of Scottish economic growth. Despite indicators that might have seemed red flags—large speculative capital flows, a fixed exchange rate, and substantial external debt—Scotland successfully navigated two severe financial crises during the Seven Years’ War.

The exception was a severe financial crisis in 1772, seven years after the imposition of the first regulations on Scottish banking—the result of aggressive lobbying by large banks seeking to weed out competition. While these restrictions did not cause the 1772 crisis, Tyler Beck Goodspeed argues, they critically undermined the flexibility and resilience previously exhibited by Scottish finance, thereby elevating the risk that another adverse economic shock, such as occurred in 1772, might threaten financial stability more broadly. Far from revealing the shortcomings of unregulated banking, as Adam Smith claimed, the 1772 crisis exposed the risks of ill-conceived bank regulation.