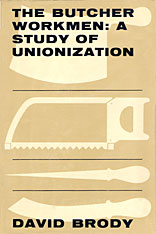 A Study of Unionization

The advance of trade unionism in the first part of the 20th century to a dominant place in the American economy brought with it a major change in the life of the nation. This phenomenal growth has not hitherto been adequately studied. This is the first book to deal with the actual process of unionization. David Brody presents here a detailed study of one industry—meat packing and retailing—with implications that apply to unionization in general. Working almost entirely from primary sources, he has had access to the files of both the AFL and CIO unions in the industry.

In this new approach to American labor history, Mr. Brody describes how and when the butcher workmen were organized, how their unions attained internal stability, and how genuine collective bargaining was finally achieved. In attempting to explain why the process developed as it did, he examines union tactics and employer opposition, industry characteristics and the effects of change in the industry. He also pays close attention to the alteration of the power balance brought about by the influence and legislation of the New Deal.

Mr. Brody’s story has two main strands. The more dramatic one concerns the meat-packing branch of the industry. Here the AFL union twice captured the great packing centers and twice lost them in climatic strikes in 1904 and 1921. It was not until World War II, after the advent of the CIO and the New Deal, that organization was finally secure. On the retail side unionization proceeded more quietly with comparatively little progress until the 1930s. The entry of the huge grocery chains such as A & P and Safeway, into the meat field then made this part of the industry accessible to organization.

The study of this particular industry illuminates the larger process of unionization. The meat trade as a whole had the characteristics not only of mass-production industry but also those of small scale, local, skilled labor operations that attracted AFL unions of the old line. Also, the unions of the old line. Also, the unions actually involved provide excellent examples of the rival approaches if the AFL and the CIO to the challenge of unionization. What emerges from the book is the complexity of the phenomenon of unionization. The process covered much more than the recruitment of members, and the causes sprang from a variety of elements, changing in importance at different times and places.