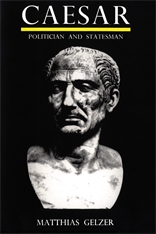 In 1912 a young scholar published a slim volume investigating the social structure of the late Roman Republic, which was in due course to transform the study of Roman history. The author, Mattias Gelzer, went on to hold the Chair of Ancient History at Frankfurt and to become the greatest German-speaking historian of the Roman Republic since Mommsen. In 1921 he published his Caesar, which has by now gone through six editions in Germany and is still the standard account, in any language, of Caesar and his age. It amply fulfills the author’s intent “to give the educated public a lively picture of the complete political career of one of the great statesmen of the past.”

Based on a conscientious evaluation of the abundant source materials—primarily the writings of Caesar and his contemporaries—Professor Gelzer’s portrait renders Caesar in heroic proportions, destined and determined from the beginning to overthrow a corrupt aristocracy. The sixth edition (1960), brought up to date and provided with full annotations by the author, is the basis of this translation, which for the first time makes the work available in English.

With Professor Gelzer’s approval, some minor errors have been corrected, both in the text and in the chronological table and the map at the end of the book, and an analytical index of names has been added.