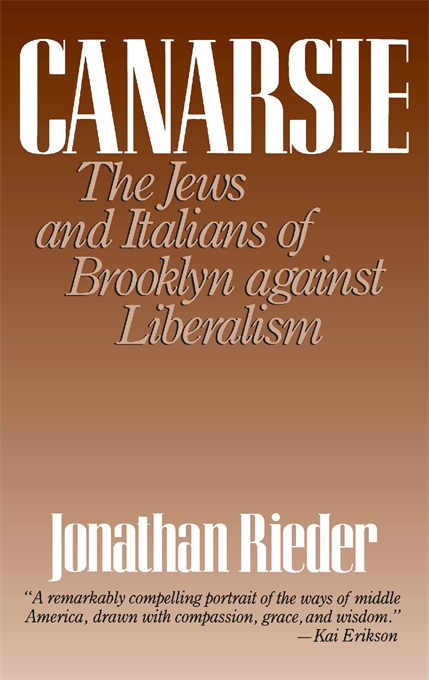 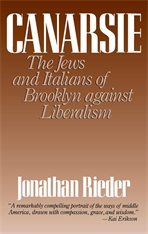 The Jews and Italians of Brooklyn against Liberalism

“Yale anthropologist Jonathan Rieder spent two years living not in New Guinea or up the Amazon but in a place that his academic colleagues probably found even more exotic: the lower-middle-class neighborhood adjacent to New York’s Kennedy Airport. There Rieder witnessed close-up the destruction of Roosevelt’s coalition by voter revulsion against crime, welfare, and casual disorder.”—David Frum, The Wall Street Journal

“No scholarly book of recent memory better conveys the specific sense of outraged betrayal that swept through the urban precincts of the Democratic Party in the mid-1970s than does Jonathan Rieder’s brilliant study Canarsie.”—Wilson Quarterly

“This is the best ethnography of a white community to appear in a decade, and should be read by every scholar in urban sociology, political sociology, and social movement… Rieder has crafted a finely detailed portrait.”—Contemporary Sociology

“A sparkling shower of insights… Intellectually exciting.”—American Journal of Sociology

“Jonathan Rieder’s new book should be required reading, particularly for that endangered tribe of unabashed Jewish liberals, of which I count myself one… Unsettling and powerful.”—Al Vorspan, Reform Judaism

“The rise of Ronald Reagan and the politics of the 1980s surprised many of the country’s best-known analysts… Jonathan Rieder was in the right places at the right time—the streets and kitchens of Canarsie, Brooklyn—to understand what was actually happening (and going to happen next) in American politics.”—Richard Reeves