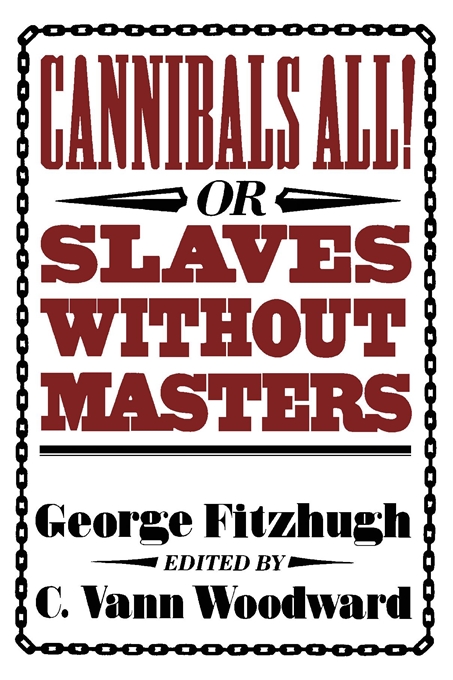 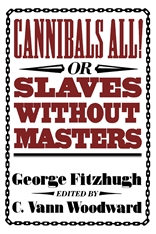 Cannibals All! got more attention in William Lloyd Garrison’s Liberator than any other book in the history of that abolitionist journal. And Lincoln is said to have been more angered by George Fitzhugh than by any other pro-slavery writer, yet he unconsciously paraphrased Cannibals All! in his House Divided speech.

Fitzhugh was provocative because of his stinging attack on free society, laissez-faire economy, and wage slavery, along with their philosophical underpinnings. He used socialist doctrine to defend slavery and drew upon the same evidence Marx used in his indictment of capitalism. Socialism, he held, was only “the new fashionable name for slavery,” though slavery was far more humane and responsible, “the best and most common form of socialism.”

His most effective testimony was furnished by the abolitionists themselves. He combed the diatribes of their friends, the reformers, transcendentalists, and utopians, against the social evils of the North. “Why all this,” he asked, “except that free society is a failure?”

The trouble all started, according to Fitzhugh, with John Locke, “a presumptuous charlatan,” and with the heresies of the Enlightenment. In the great Lockean consensus that makes up American thought from Benjamin Franklin to Franklin Roosevelt, Fitzhugh therefore stands out as a lone dissenter who makes the conventional polarities between Jefferson and Hamilton, or Hoover and Roosevelt, seem insignificant. Beside him Taylor, Randolph, and Calhoun blend inconspicuously into the American consensus, all being apostles of John Locke in some degree. An intellectual tradition that suffers from uniformity—even if it is virtuous, liberal conformity—could stand a bit of contrast, and George Fitzhugh can supply more of it than any other American thinker.