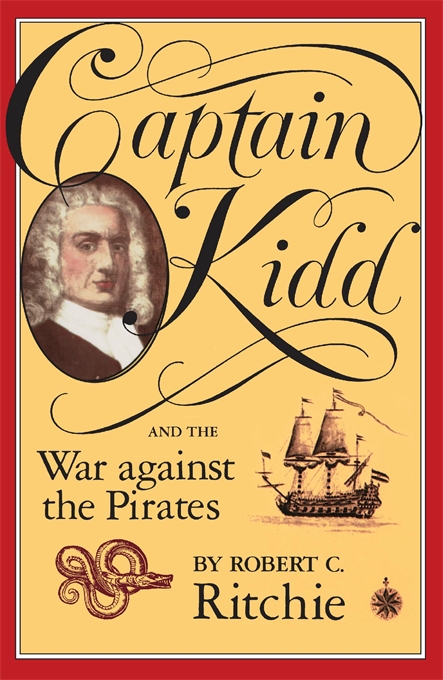 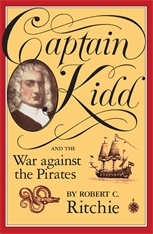 Captain Kidd and the War against the Pirates

The legends that die hardest are those of the romantic outlaw, and those of swashbuckling pirates are surely among the most durable. Swift ships, snug inns, treasures buried by torchlight, palm-fringed beaches, fabulous riches, and, most of all, freedom from the mean life of the laboring man are the stuff of this tradition reinforced by many a novel and film.

It is disconcerting to think of such dashing scoundrels as slaves to economic forces, but so they were—as Robert Ritchie demonstrates in this lively history of piracy. He focuses on the shadowy figure of William Kidd, whose career in the late seventeenth century swept him from the Caribbean to New York, to London, to the Indian Ocean before he ended in Newgate prison and on the gallows. Piracy in those days was encouraged by governments that could not afford to maintain a navy in peacetime. Kidd’s most famous voyage was sponsored by some of the most powerful men in England, and even though such patronage granted him extraordinary privileges, it tied him to the political fortunes of the mighty Whig leaders. When their influence waned, the opposition seized upon Kidd as a weapon. Previously sympathetic merchants and shipowners did an about-face too and joined the navy in hunting down Kidd and other pirates.

By the early eighteenth century, pirates were on their way to becoming anachronisms. Ritchie’s wide-ranging research has probed this shift in the context of actual voyages, sea fights, and adventures ashore. What sort of men became pirates in the first place, and why did they choose such an occupation? What was life like aboard a pirate ship? How many pirates actually became wealthy? How were they governed? What large forces really caused their downfall?

As the saga of the buccaneers unfolds, we see the impact of early modern life: social changes and Anglo-American politics, the English judicial system, colonial empires, rising capitalism, and the maturing bureaucratic state are all interwoven in the story. Best of all, Captain Kidd and the War against the Pirates is an epic of adventure on the high seas and a tale of back-room politics on land that captures the mind and the imagination.