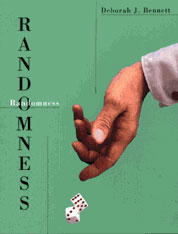 “[Randomness] can most easily be described as a brief history of chance… I can cheerfully recommend it to anyone who is a total beginner when it comes to probability, what it means, why it is desperately puzzling, and what it can do for us despite that… It is fascinating to read about the pioneers of probability, such as Pierre Simon de Laplace with his ‘normal distribution’—now more familiar as the notorious bell curve—and Adolphe Quetelet, perhaps the first to realise that there are statistical patterns in human behaviour. And I applaud the blunt reminder that when it comes to the real world the ‘normal’ distribution is actually highly abnormal… My main criticism: it left me wanting more. A sequel, please.”—Ian Stewart, The Times Higher Education Supplement

“Clearly, the computation of probabilities is not just an arid game… As Deborah Bennett shows in her excellent little book on the mathematics of chance, the concept has been controversial for thousands of years… [Her] cultured and accessible book goes a long way towards demystifying the science of probability and thereby offers the reader a useful variety of conceptual tools with which to probe the future and illuminate the present.”—Steven Poole, The Guardian

“Chances are high that reading this book will clear up your misconceptions about randomness and probabilities. In this very entertaining little book, simply written but intended for careful readers, some of the most common mistakes people make about chance are carefully analyzed. While describing interesting aspects of the mathematics of probability, the author takes frequent detours into the history of humanity’s understanding (and misunderstanding) of the laws of chance, touching on subjects as diverse as chance in decision-making and the fairness of those decisions, gambling and our intuitive understanding of chance, the likelihood of the extremely rare, the existence of true randomness and how computers have helped shape modern thinking about probabilities… An insightful chapter is ‘Chance or Necessity?’ The question is very, very old (determinism versus chaos), and the answer is not clear even today. The author describes the problem beautifully: ‘Is random outcome completely determined, and random only by virtue of our ignorance of the most minute contributing factors?’ Einstein grappled with this conundrum until his death and never ceased to combat the idea that God could conceivably throw dice… Whether well-educated in mathematics or not, people have always been fascinated by randomness and intrigued by the fundamental question of the real nature of randomness, of how you can tell randomness from something that is not.”—J.A. Rial, American Scientist

“In this book, Bennett seeks to account for the centuries-long lapse between early uses of chance in decision making and the more technical studies of probability first undertaken in the seventeenth century. At the same time, she explores the confusions and misunderstandings about probability that persist today. She argues that the notion of randomness played a crucial role in inhibiting conceptual progress in probability and that it also accounts for present-day struggles to come to terms with the subject… Bennett’s book is written in a lucid, engaging style and provides an entertaining introduction to some questions in probability.”—Patti Wilger Hunter, Isis

“[This book] examines randomness and several other notions that were critical to the historical development of probabilistic thinking and that also play an important role in any individual’s understanding of the laws of chance. [It] addresses why, from ancient times to today, people have resorted to chance in making decisions; whether a decision made by random choice is a fair decision; how to figure the odds; what role gambling has played in understanding chance; whether extremely rare events are likely in the long run; why some societies and individuals reject randomness; whether true randomness exists; the view of randomness as uncertainty; why even experts disagree about the many meanings of randomness; and why probability is so counterintuitive.”—Journal of Economic Literature

“The fact that randomness, agency, and holiness can readily displace each other in phenomenological explanations of human action is the central concern that might draw students of consciousness to Bennett’s book. Bennett does an excellent job, explaining and drawing out the major questions that swirl around the randomness–agency–holiness issue.”—T. W. Draper, Journal of Consciousness Studies

“The great strength of this book is the way it uses history and even prehistory of probability to chart its present territory and cast light on its core point of contention: does true randomness exist in nature, or is it only a psychological artefact? …Bennett’s text…is like a café conversation between likable cognoscenti…nothing could more provoke and excite the reader.”—Simon Ings, New Scientist

“[A] sharp analysis of the way we assess probability in everyday life.”—Robert Winder, New Statesman & Society

“Randomness, by mathematician Deborah J. Bennett, was obviously a labor of love. The result is an interesting book that combines a well-researched, anecdotally presented survey of the history of chance, probability and randomness along with some elementary instruction in probability… It includes a wide-ranging and rich bibliography that reflects the passion of the author for the subject. Anybody interested in gaming, random numbers, the Monte Carlo method and so on will find nice anecdotal descriptions of these topics, together with detailed notes and references to the bibliography for more detailed study. It is a good book to have.”—Stephen Gasiorowicz, Physics Today

“In 1996 Charles Hailey and David Helfand reported their calculations of the odds of a commercial airliner being struck by a meteor, in response to speculation about TWA flight 800… They conclude that, in over 30 years of air travel, the probability that a commercial flight would have been hit by a meteor big enough to crash it is 1 in 10. This bit of probability trivia is an indication of human beings continuous struggle to understand probability and chance through the ages, and Deborah Bennett captures the fascination with numbers in this pocket-sized volume. The book is filled with…gems.”—Skeptic

“This volume is exceptionally readable. It takes away much of the mystery of probability while adding to our sense of wonder.”—Wordtrade

“Mathematics is its own language, and sometimes it doesn’t translate readily into other human tongues. But Bennett is brilliantly bilingual, well able to put mathematical concepts into clear, expressive English. Her topic is intrinsically fascinating, for who has not felt buffeted by random events, and who has not sought to see when the wheel of fortune may turn up good luck? …More than an intriguing exploration of a peculiarly fascinating part of mathematics, its coverage, ranging from ancient games of chance to modern probability mind-games, makes it comprehensive as well as compulsively readable.”—Patricia Monaghan, Booklist

“A clear and detailed examination of the role of pure chance, with fascinating historical asides.”—Kirkus Reviews

“A careful and well-written treatment of an intriguing subject.”—Donald Goldsmith, author of The Ultimate Einstein

“Randomness tells us about chance by recalling the real history of probability and solving many of its engaging puzzles. Beginners will find themselves welcomed and well led.”—Frederick Mosteller, Harvard University

“Randomness explains probability and odds in an accessible way. This book puts risk and chance into perspective for the airline passenger and the lottery player alike.”—Henry Petroski, author of Invention by Design: How Engineers Get from Thought to Thing