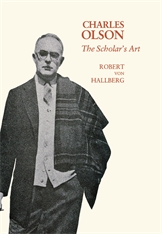 “Brilliant… One puts it down with the conviction that it is also one of the most remarkable books on any post-war poet… Von Hallberg’s contention that Olson’s poems ‘cannot be adequately appreciated within terms of recent poetic theory’, and his subsequent exploration of alternative theory, powerfully remove our preconceptions of what a poem ought to be and so enable us to see with a new clarity the nature of Olson’s achievement.”—The Times Literary Supplement

“This book is careful, useful and provocative, and intelligently sees Olson in the literary tradition of Pound, Williams, and the Objectivists, and the politico-cultural context of New Deal liberalism.”—The Georgia Review

“Von Hallberg is especially good on Whitehead’s influence on Olson and the relationship of Olson’s poetics to that of the ‘objectivists’… His study of Olson’s relation to Pound and Williams is definitive. Moreover, even though he is interested mainly in Olson’s theories, his readings of difficult key poems are often little short of brilliant.”—American Literature

“Robert von Hallberg’s is the first reasoned effort to say what kind of poet Olson was: always the first thing we need to know about an American innovator. No intending voyager in the seas and shoals of Maximus should omit this book from his kit.”—Hugh Kenner

“Charles Olson: is he a cranky, self-obsessed, and messianic theorist? Or is he indeed a particularly charismatic writer who has synthesized the several poetic impulses of a generation? These are the components of the Olson ‘question’—a question to which Mr. von Hallberg commits himself with energy and erudition. His book is deeply engaged with previously untouched materials and broadly informed.”—John Malcom Brinnin