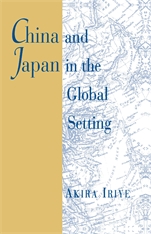 China and Japan in the Global Setting

“This is an eloquently written, serious, and original set of lectures. The book will interest political scientists as much as historians because of its explicit orientation to what the author calls ‘international history’ and because of his very interesting manipulation of the three concepts of power, economy, and culture in order to explain why his three eras—late Meiji, interwar, and postwar—differ from each other.”—Chalmers Johnson, University of California, San Diego

“The best single work available on this host complex relationship, which too often has been the subject of politicized and simplified analysis.”—William Kirby, Harvard University