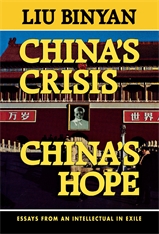 Liu Binyan (1925–2005), born in Changchun, Manchuria, exemplified in his words and actions the tradition of the courageous literati of independent conscience. A party member since the beginning of China’s 1949 revolution and a firm believer in Marxism, Liu pointed out how the Chinese Communist Party came to abuse its power. In 1957 he was expelled from the party and sent down to the countryside to do hard physical labor. Forbidden from publishing, he was barely able to support his family. With the establishment of the Deng Xiaoping regime in late 1978 and the rehabilitation of political prisoners by Deng’s protégé, Hu Yaobang, Liu was made “special correspondent” for the party’s official newspaper People’s Daily. By 1979, he had begun to publish a series of investigative essays that exposed the party’s corrupt practices and suppression of the people’s rights. His exposés electrified the nation, and in 1987 Liu was purged from the party once again, along with his political ally Hu Yaobang. It was Hu’s death that precipitated the massive pro-democracy demonstrations in Tiananmen Square.

As a Nieman Fellow at Harvard University in 1988–89, Liu was able to predict in his lectures, only a month prior to the Beijing uprising in the spring of 1989, the impending turmoil. Excoriated by China’s leaders, he was unable to return to his homeland.

Merle Goldman is Professor of History, Emerita, at Boston University and Associate of the Fairbank Center for Chinese Studies at Harvard University.