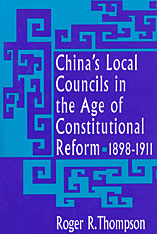 China’s Local Councils in the Age of Constitutional Reform, 1898–1911

Dazzled by the model of Japan’s Western-style constitutional government, Chinese officials and elite activists made plans to establish locally elected councils. By October 1911, government agencies had reported the establishment of about 5,000 councils.

Throughout the period, data on self-government reforms collected from localities were compiled in provincial capitals, then collated, summarized, and archived in Beijing. Simultaneously, directives were being sent from the capital to the provinces. From this wealth of previously unexamined material, Roger R. Thompson draws a portrait-in-motion of the reforms. He demonstrates the energy and significance of the late-Qing local-self-government movement, while making a compelling case that it was separate from the well-studied phenomenon of provincial assemblies and constitutionalism in general.