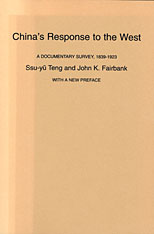 China’s Response to the West

The present confrontation of Communist China and the United States, on which the future of peace in Asia hinges, is merely the latest phase in a continuing historical process—the remaking of China’s ancient society under the stimulus of Western contact. How does it happen that a century of foreign trade and missionary evangelism, of modern education and the training of Chinese students in Western ways, has now resulted in a seeming rejection of the West? What has been the real nature of “China’s response to the West” during the past century of our contact?

This volume gives the first inside account, on so broad a scale, of how China’s leaders reacted to the invasion of Western arms and goods, persons and ideas, during the three generations from the Opium War to the rise of the Kuomintang. In 28 chapters, with translations of 65 key documents, the authors trace the stages by which the scholar-officials of the Middle Kingdom were brought to recognize successively the need for Western arms to defend their country, Western technology for making arms, modern science to support technology, its application in modern industry to strengthen the nation, and all the attendant new ideas which led them eventually into great movements for institutional reform, political revolution, and ideological reconstruction.

From the famous Commissioner un’s first study of Western geography during his anti-opium crusade, through the efforts of Li Hungchang and others at “self-strengthening” by industrialization, down to the critical thought of Dr. Hu Shih and the eclecticism of Sun Yat-sen in the early 20th century, the writings of China’s leaders ring the changes on a central theme how to remake their heritage and create a modern nation capable of meeting the West on equal terms. The provincial viceroys, the Reformers of 1898, the Boxers in 1900, the old Empress Dowager, and the eager students studying abroad, each in their own way, all grapple with this absorbing problem. The varied Chinese responses to the West in the formative century here analyzed give us a new insight into the springs of social action among one-fifth of mankind.

The companion volume, for the research specialist, provides Notes and Sources, Bibliography, and a Glossary of Chinese names and terms, essential bases for further exploration of this new field.