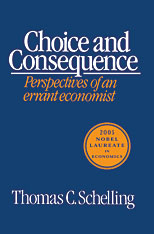 Thomas Schelling is a political economist “conspicuous for wandering”—an errant economist. In Choice and Consequence, he ventures into the area where rationality is ambiguous in order to look at the tricks people use to try to quit smoking or lose weight. He explores topics as awesome as nuclear terrorism, as sordid as blackmail, as ineffable as daydreaming, as intimidating as euthanasia. He examines ethical issues wrapped up in economics, unwrapping the economics to disclose ethical issues that are misplaced or misidentified.

With an ingenious, often startling approach, Schelling brings new perspectives to problems ranging from drug abuse, abortion, and the value people put on their lives to organized crime, airplane hijacking, and automobile safety. One chapter is a clear and elegant exposition of game theory as a framework for analyzing social problems. Another plays with the hypothesis that our minds are not only our problem-solving equipment but also the organ in which much of our consumption takes place.

What binds together the different subjects is the author’s belief in the possibility of simultaneously being humane and analytical, of dealing with both the momentous and the familiar. Choice and Consequence was written for the curious, the puzzled, the worried, and all those who appreciate intellectual adventure.