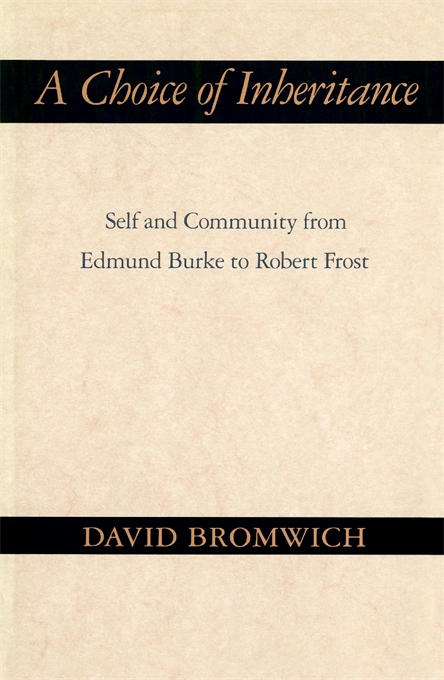 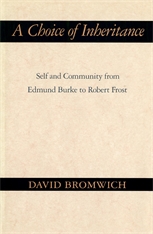 A Choice of Inheritance

Self and Community from Edmund Burke to Robert Frost

For the last two centuries, literature has tested the authority of the individual and the community. During this time, in David Bromwich’s words, “A motive for great writing…has been a tension, which is felt to be unresolvable, between the claims of social obligation and of personal autonomy. That these had to be experienced as rival claims was the discovery of Burke and Wordsworth. Our lives today and our choices are made in a culture where any settlement of the contest for either side is bound to be provisional. There is nothing to approve or regret in such a situation; it is the way things are; and in a time like ours, it is what great writing lives on.”

With a historical as well as an interpretative emphasis, Bromwich explores this tension. He shows why the public-mindedness of the eighteenth century is as limited a model for readers now as the individualism of the nineteenth century. Calling attention to the ambivalence of the great writers, he cites Emerson’s sense of the conflict between “spirit” and “commodity” and Burke’s conviction that human nature is at once given and chosen. Elsewhere, he describes the attenuation of social concern even in the truest modern followers of the romantics as in the conscious turn away from Wordsworth’s morality in poems by Stevens and Frost. Other topics include Keats’s politics, Whitman’s prose, William Cobbett’s journalism, and the standards of the Edinburgh Review.

In some widely discussed general essays, Bromwich addresses such issues as the uses of biography, the idea that authors create their own worlds, and the political ambitions of recent literary theory. His own criticism is powerfully eclectic, combining history, philosophy, biography, and a subtle awareness of how literature performs its work of implication. He brings to the task an authentic understanding of intellectual culture and the ability to leap from textual detail to cultural observation with an understated grace.

As in his other writing, Bromwich aims to join aesthetic theory and moral thought. He rethinks the relationship between genius and talent, and defines genius in terms of its capacity to bring about change, rather than simply its quality of inward and spiritual uniqueness. His sustained defense here of that conception, and his elegant argument for a new approach to criticism generally, make this thoughtful book a controversial one as well.