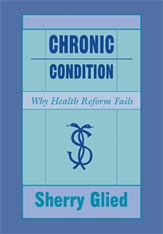 Chronic Condition provides a compelling analysis of the causes of the current health care crisis and of the shortcomings of reform proposals. It also offers an ingenious new framework for reform that, while minimizing government interference, would provide a means for financing care for the less affluent.

Prior reform proposals, Glied argues, have failed to account for the tension between the clearly manifested desire for improving the quality of health care and the equally widespread interest in assuring that the less fortunate share in these improvements. After careful analysis of the ill-fated Clinton plan, Glied proposes a new solution that would make the willingness to pay for innovation the means of financing health care improvements for the less affluent. While rejecting the idea that the distribution of health care should be perfectly equal, Glied’s proposal would enable all Americans to benefit from the dynamics of the free market.