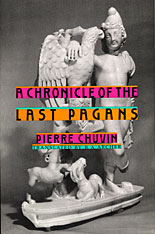 A Chronicle of the Last Pagans

Translated by B. A. Archer

A Chronicle of the Last Pagans is a history of the triumph of Christianity in the Roman Empire as told from the perspective of the defeated: the adherents of the mysteries, cults, and philosophies that dominated Greco-Roman culture.

With a sovereign command of the diverse evidence, Pierre Chuvin portrays the complex spiritual, intellectual, and political lives of professing pagans after Christianity became the state religion. While recreating the unfolding drama of their fate—their gradual loss of power, exclusion from political, military, and civic positions, their assimilation, and finally their persecution—he records a remarkable persistence of pagan religiosity and illustrates the fruitful interaction between Christianity and paganism. The author points to the implications of this late paganism for subsequent developments in the Byzantine Empire and the West. Chuvin’s compelling account of an often forgotten world of pagan culture rescues an important aspect of our spiritual heritage and provides new understanding of Late Antiquity.