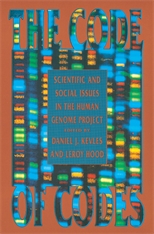 The Code of Codes

Scientific and Social Issues in the Human Genome Project

“The Code of Codes…gives a very balanced cross-section of views on both the scientific aspects of the project and many of the social issues surrounding it… In studying the human genome, much will be discovered about the evolution of life and living systems and if, as the book tries to show, there are fears, there is also hope that this knowledge will benefit humanity. What more can one want?”—Sydney Brenner, Nature

“This book provides much valuable information on a program that has become international rather than provincial, but whose perceived urgency may exceed its justification.”—Bernard D. Davis, Science

“So far, the research (on human genetics) is on track, according to Kevles and Hood, who edited [this] impressive collection of thirteen critical essays by leading biologists, computer scientists and social scientists commenting on both the Genome Project itself and the important ethical implications of the new discoveries in human genetics.”—John Wilkes, The Los Angeles Times

“There is a stream of books on the Human Genome Project… This is the best so far. If you want to know the best—and worst—of what tomorrow’s genetics can do, buy it.”—Steve Jones, Worldlink Magazine