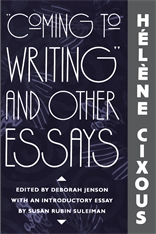 “Coming to Writing” and Other Essays

Edited and translated by Deborah Jenson

“Hélène Cixous is today, in my view, the greatest writer in what I will call my language, the French language if you like. And I am weighing my words as I say that. For a great writer must be a poet-thinker, very much a poet and a very thinking poet.”—Jacques Derrida

“Deborah Jenson judiciously selects from Cixous’s output between 1976–89: ‘Coming to Writing,’ ‘Clarice Lispector: The Approach,’ ‘Tancredi Continues,’ ‘The Last Painting or the Portrait of God,’ ‘By the Light of an Apple,’ and ‘The Author in Truth.’ Her perceptive closing essay, together with Susan Suleiman’s introduction…trace the umbilical links between Cixous’s end-stopped poetic-philosophic prose and her roots which anchor her perilously between two holocausts, Jewish and colonial, and two tongues, German and the classical French… These essays highlight a wealth of disparate inspiration…[in] an ideal guide to Cixous.”—Elizabeth Moles, The Times Higher Education Supplement

“Cixous, important as she is as a feminist theorist and activist, is equally important as an accurate emotional sounding board for women everywhere. As such, her articulation of powerful, if delicate, perceptions in lucid prose/poetry compels the attention of European and American readers… The power of her prose is philosophically sound.”—Choice

“The tradition of Cixous’s interest in feminine writing and talent at manipulating words continues in this collection. [In one essay] she describes vividly how she was overcome by the intoxication of writing… Other essays explore the influence of music and gender on writing…and painting. In all cases the language is visual and jewel-like, sparkling with color.”—Library Journal