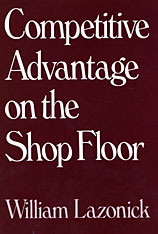 Competitive Advantage on the Shop Floor

William Lazonick explores how technological change has interacted with the organization of work, with major consequences for national competitiveness and industrial leadership. Looking at Britain, the United States, and Japan from the nineteenth century to the present, he explains changes in their status as industrial superpowers. Lazonick stresses the importance for industrial leadership of cooperative relations between employers and shop-floor workers. Such relations permit employers to use new technologies to their maximum potential, which in turn transforms the high fixed costs inherent in these technologies into low unit costs and large market shares. Cooperative relations can also lead employers to invest in the skills of workers themselves—skills that enable shop-floor workers to influence quality as well as quantity of production.

To build cooperative shop-floor relations, successful employers have been willing to pay workers higher wages than they could have secured elsewhere in the economy. They have also been willing to offer workers long-term employment security. These policies, Lazonick argues, have not come at the expense of profits but rather have been a precondition for making profits.

Focusing particularly on the role of labor-management relations in fostering “flexible mass production” in Japan since the 1950s, Lazonick criticizes those economists and politicians who, in the face of the Japanese challenge, would rely on free markets alone to restore the international competitiveness of industry in Britain and the United States.