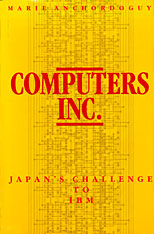 This account of efforts to build a domestic Japanese computer industry is enlivened with quotations from industrial leaders commenting on the stages through which Japan has emerged as a world-class competitor.

In the late 1950s, Japan was still relying on IBM and other foreign suppliers. After the decision to enter the computer field, the government used protectionism, financial aid, and cooperative R&D projects to assist firms in developing hardware and improving their technology. The establishment of a quasi-public computer rental company to carry the burden of financing rentals played a key role in helping fledgling firms compete with IBM.

Marie Anchordoguy shows how government intervention in the market avoided the risks of technological sluggishness by encouraging keen competition among domestic computer firms. She traces the growth of Japanese computer hardware to Japan’s position as an exporter of mainframes and describes some of the problems encountered in producing software. This study provides a clear example of the way in which government–industry cooperation has enhanced Japan’s position in the world market.