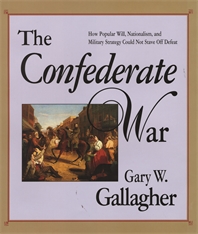 If one is to believe contemporary historians, the South never had a chance. Many allege that the Confederacy lost the Civil War because of internal division or civilian disaffection; others point to flawed military strategy or ambivalence over slavery. But, argues distinguished historian Gary Gallagher, we should not ask why the Confederacy collapsed so soon but rather how it lasted so long. In The Confederate War he reexamines the Confederate experience through the actions and words of the people who lived it to show how the home front responded to the war, endured great hardships, and assembled armies that fought with tremendous spirit and determination.

Gallagher’s portrait highlights a powerful sense of Confederate patriotism and unity in the face of a determined adversary. Drawing on letters, diaries, and newspapers of the day, he shows that Southerners held not only an unflagging belief in their way of life, which sustained them to the bitter end, but also a widespread expectation of victory and a strong popular will closely attuned to military events. In fact, the army’s “offensive-defensive” strategy came remarkably close to triumph, claims Gallagher—in contrast to the many historians who believe that a more purely defensive strategy or a guerrilla resistance could have won the war for the South. To understand why the South lost, Gallagher says we need look no further than the war itself: after a long struggle that brought enormous loss of life and property, Southerners finally realized that they had been beaten on the battlefield.

Gallagher’s interpretation of the Confederates and their cause boldly challenges current historical thinking and invites readers to reconsider their own conceptions of the American Civil War.