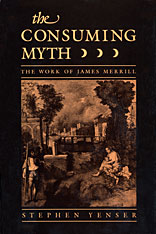 The Work of James Merrill

James Merrill is now widely recognized as one of the essential poets of our time, one of those whose achievement will define postwar American literature. The Consuming Myth is a discerning account of his work that will well serve amateur and initiate alike. Stephen Yenser ranges over all of Merrill’s writing to date, from a precocious book printed when its author was fifteen to his most recent publication, a verse play. He writes about both of the poet’s novels and pays particular attention to the epic poem The Changing Light at Sandover. His close readings shed light on Merrill’s boldly and subtly original techniques, his kinship with Mallarmé, Proust, Yeats, Stevens, and others, and the network of connections among his diverse undertakings.

Yenser suggests that Merrill’s special power springs in part from transactions between evidently opposing perceptions. On the one hand—as the result of some poetic version of what physicists call “pair production”—whatever Merrill looks at hard yields its contraries. All about him, and within him too, he discovers duality and division. On the other hand, he is profoundly aware of the interconnectedness of things, whether they be his life and his art (which we might think of as aspects of his work), or humanity and nature, or good and evil. It is out of quarrels with ourselves that we make poetry, Yeats observed; and it is in striving to accommodate intuitions of both difference and identity that Merrill has fashioned his distinctive manner.