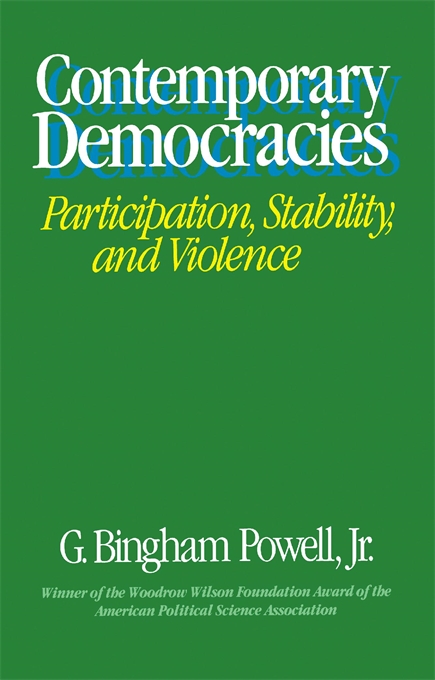 “G. Bingham Powell’s new work clearly fits into the small group of important studies of the past generation that combine rigorous analysis of data from a number of societies and theoretical generalizations that have appeared in bits and pieces in studies of more limited scope. The result is impressive… We are treated to a mature piece of social science scholarship, one that represents the ‘state of the art’ in comparative political studies.”—Worldview

“One of the most important contributions to political science of the last decades. Through rigorous empirical analysis…[Powell] provides us with a rich set of tested propositions about the complex interrelationship of socio-cultural environments, institutional and electoral arrangements, party and interest group systems, and government political performance. He has brought us significantly closer to a scientific theory of democracy.”—Gabriel A. Almond

“The central role of political parties as they mediate between environmental, social, and economic factors, on the one hand, and political outcomes, on the other hand, is delineated in a way that I find especially illuminating and creative. The book will stand as a major work in comparative politics.”—Jorge I. Domínguez

“This judicious methodological approach, the wide substantive scope, and the wealth of empirical findings clearly make Powell’s book one of the most important contributions to comparative democratic politics in recent years.”—Arend Lijphart