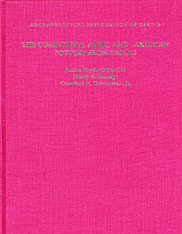 The Corinthian, Attic, and Lakonian Pottery from Sardis

Although the treasury of King Croesus held great quantities of gold and silver plate, the Lydians clearly loved fine ceramic wares imported from Greece. This preference was entirely appropriate for the capital of the expansive Lydian Kingdom, which occupied a pivotal position between the city states of the Greeks and the gigantic empire of the Persians. The importation of Greek pottery corresponds to the visits from poets, philosophers, and politicians mentioned by the historian Herodotus.

This collaborative work consists of three generously illustrated sections presenting the ceramic finds excavated at Sardis, but produced in the mainland Greek centers of Corinth, Athens, and Sparta. Judith Snyder Schaeffer analyzes the Corinthian imports, Nancy H. Ramage the Attic, and Crawford H. Greenewalt, Jr., the Lakonian. Their study of this material from the Harvard–Cornell excavations at Sardis offers new evidence of the taste for specific Greek wares and shapes in Anatolia before the time of Alexander the Great.