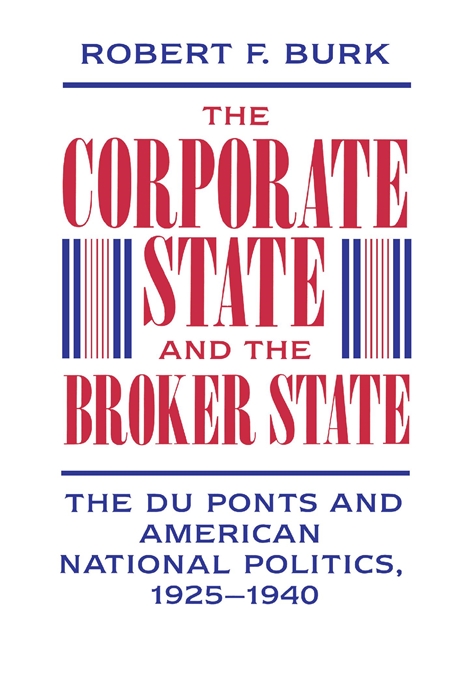 The Corporate State and the Broker State

The du Ponts, one of the most powerful families in American industry, actively fought the policies that gave government more and more power over the economy. It was not centralization they opposed—indeed, the New Deal initially gained their favor because it appeared to promise a “corporate state” administered along the same lines as a business organization—but the sharing, or brokering, of power among various political interests. If government was to direct the economy, they felt, it should be in the hands of proven business leaders such as themselves.

The du Pont brothers and their close colleague, John Raskob, first tried their hand at political action by waging a campaign against prohibition, which they said intruded upon the liberty of all citizens, raised taxes, and hampered the economy. It was this issue, and the management of public schools, that prompted the industrialists to propose business-style administrative bodies in government. To further this goal the du Ponts became increasingly active in the Democratic Party, especially the presidential campaigns from 1928 to 1940.

With the repeal of prohibition and the creation of the National Recovery Administration, the New Deal at first looked promising to the du Ponts. But they contested the emerging broker state—one that legitimated the rival claims of competing interests and maintained dual structures of public and private economic governance—of the late 1930s. When the chance for national political management by a private, centralized industrial hierarchy and corporatism failed to gain a hold in the American polity, the du Ponts joined forces with the opposition. They backed the supposedly nonpartisan Liberty League with the intention of organizing a grass-roots protest of the incursion of government into peoples’ lives and the increasing power of the executive branch. But the League received little popular support and survived only by the contributions of disaffected business leaders.

Throughout these turbulent years the du Ponts kept up an active correspondence; rarely does the historian have access to such extensive personal as well as official records. By focusing on one family’s contribution to the economic and political debate between the world wars, Robert Burk casts light on the changing fortunes of business and government in twentieth-century America. In so doing, he modifies some of our popular conceptions about the 1920s and 1930s.