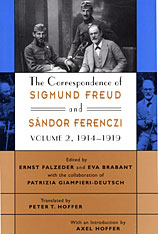 The Correspondence of Sigmund Freud and Sándor Ferenczi, Volume 2: 1914-1919

“Freud’s extensive correspondence with his disciples offers an inside vantage point on the psychoanalytic movement…[and] no colleague wrote to Freud on more intimate terms than Sándor Ferenczi… Absorbing… Like the first volume of the Freud–Ferenczi correspondence, Volume 2 has been meticulously prepared. Footnotes to each letter explain literary and biographical references, translate Latin phrases and occasionally even explain jokes. Axel Hoffer’s introduction offers enough background to make this second volume worth reading on its own.”—Kenneth Baker, The San Francisco Examiner & Chronicle

“This comprises the second volume of the three-volume collection of the Freud–Ferenczi correspondence, and should be of great interest to those wishing to chart the road of this rocky friendship. Brilliant moments of self-analysis and analysis are contained here, analyses that clash, fall apart, and reconstruct before the reader’s eyes. The volume offers crucial insights into the psychoanalytic method and into the thin line between friendship and the analyst/analysand relationship.”—Virginia Quarterly Review

“The second volume of the Freud–Ferenczi correspondence commences with the beginnings of World War I, and the events of that period form a background to the correspondence, which carries on through to December 1919. The letters, as in Volume 1, give a vivid and fascinating story of the interaction between Ferenczi and Freud, including Ferenczi’s periods of analysis with Freud, and the intensely personal correspondence between the two.”—International Journal of Psycho-Analysis

“The experience of the Hungarian psychoanalyst Sándor Ferenczi as an almost combatant is well documented here… From a scholarly point of view, the correspondence is rich in its discussions of the major anthropological texts which Freud worked on during [World War I] as well as pragmatic questions of technique. Ferenczi’s discussion of his own analytic work is such that this volume serves as a natural parallel to the published clinical diaries. And the deviations from ‘orthodox’ approaches are noted by Freud… The most fascinating part of the correspondence was its tone. Only in Freud’s letters with Karl Abraham, who was very much more of his own generation, does one get the bantering quality which marks an exchange between equals… As with the first volume, this volume is the final result of a project begun by Michael Balint in the 1950s. The editing and notes are impeccable and the translation fluid. It is imperative that we continue to get such exchanges to clarify and document Freud’s life and world. They will also have a wide range of other readers. When is volume three going to appear?”—Sander L. Gilman, Medical History

“An excellent introduction by the American analyst Axel Hoffer [to these letters] places the emotional interchange between Freud and Ferenczi (whose mutual creativity regarding analytic understanding flourished) in personal, historical, and professional context… An exciting read for all interested in the underpinnings of the cradle of psychoanalysis and the history of ideas, and for scholars interested in correspondence of the period.”—Choice