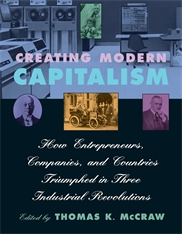 How Entrepreneurs, Companies, and Countries Triumphed in Three Industrial Revolutions

What explains the national economic success of the United States, Britain, Germany, and Japan? What can be learned from the long-term championship performances of leading business firms in each country? How important were specific innovations by individual entrepreneurs? And in the end, what is the true nature of capitalist development?

The Pulitzer Prize–winning historian Thomas K. McCraw and his coauthors present penetrating answers to these questions. Creating Modern Capitalism is the first book to explain for a broad audience the interconnections among technological innovation, management science, the power of entrepreneurship, and national economic growth. The authors approach each question from a comparative framework and with a unique triple focus on national economic systems, particular companies, and individual business leaders.

Above all, the book focuses on how specific entrepreneurs influenced the economic success of their countries: Josiah Wedgwood and Henry Royce in Britain; August Thyssen and Georg von Siemens in Germany; Henry Ford, Alfred Sloan, and the two Thomas J. Watsons in the United States; Sakichi Toyoda, Masatoshi Ito, and Toshifumi Suzuki in Japan.

The product of a three-year collaborative effort at the Harvard Business School, the book combines cutting-edge scholarship with a finely tuned sense of the art of management. It will engage general readers as well as those with a special interest in entrepreneurship and the evolution of national business systems.