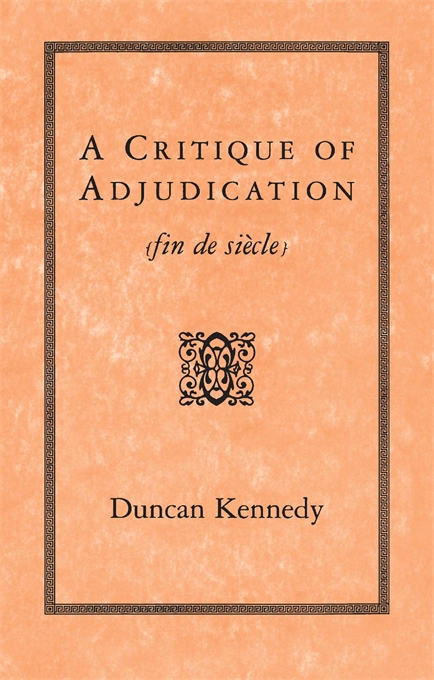 A Critique of Adjudication

A major statement from one of the foremost legal theorists of our day, this book offers a penetrating look into the political nature of legal, and especially judicial, decision making. It is also the first sustained attempt to integrate the American approach to law, an uneasy balance of deep commitment and intense skepticism, with the Continental tradition in social theory, philosophy, and psychology.

At the center of this work is the question of how politics affects judicial activity—and how, in turn, lawmaking by judges affects American politics. Duncan Kennedy considers opposing views about whether law is political in character and, if so, how. He puts forward an original, distinctive, and remarkably lucid theory of adjudication that includes accounts of both judicial rhetoric and the experience of judging. With an eye to the current state of theory, legal or otherwise, he also includes a provocative discussion of postmodernism.

Ultimately concerned with the practical consequences of ideas about the law, A Critique of Adjudication explores the aspects and implications of adjudication as few books have in this century. As a comprehensive and powerfully argued statement of a critical position in modern American legal thought, it will be essential to any balanced picture of the legal, political, and cultural life of our nation.