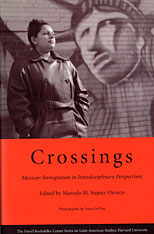 “The incorporation of the commentaries works well, rendering the tome less passive than many scholarly texts, and often reinforcing points raised whilst introducing new areas of discussion. Well-judged and evocative photographs by Anna LeVine give an added ‘real’ dimension to a thought-provoking work that illustrates the importance of creating a climate in which diverse ethnic groups can flourish.”—British Bulletin of Publications

“Crossings is must-reading for anyone interested in the ‘new immigration.’ The thoughtful and carefully researched interdisciplinary essays on economic, social, cultural, psychological, and political aspects of the Mexican immigrant experience make this volume a unique contribution to social science work on an important international topic.”—Susan Eckstein, Boston University, President of the Latin American Studies Association

“An up-to-date look at the dynamics and effects of Mexican immigration, the longest-running and largest inflow in the history of the nation in this century. Because contributors come from both sides of the border and some of them have experienced the processes that they describe, the contents are richer and more persuasive than books written from a single-country perspective. A significant addition to the research literature on contemporary immigration.”—Alejandro Portes, Princeton University, President of the American Sociological Association

“The originality of this timely book lies in its bilateral approach and interdisciplinary nature. A challenging work by prestigious scholars, it is a major achievement that will foster academic cooperation on one of the most complex issues in U.S.–Mexico relations.”—Mónico Verea, Founding Director and Researcher, Centro de Investigaciones sobre America del Norte, Universidad Nacional Autónoma de México